People living near streams or rivers are being urged to evacuate their homes.

HURRICANE SALLY STRENGTHENED to a Category 2 system with 100 mile-an-hour winds and heavy rain as it made landfall on the US Gulf Coast early today.

Forecasters warned of “historical flooding” as the storm inched north-northwest towards the coast at around two miles per hour, with the National Hurricane Centre’s confirming it made landfall at Gulf Shores in Alabama this morning.

Rain fell sideways and began covering roads in Pensacola, Florida, and Mobile, with more than 80,000 power customers in the area without electricity, according to poweroutage.us.

Up to a foot of rain had fallen already on the coast by last night and Sally’s lumbering pace meant there would likely be extended deluges. 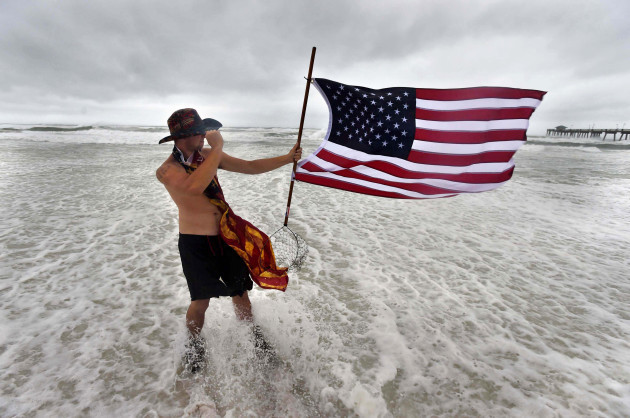 “A hurricane moving at two miles per hour is stalled for all intents and purposes,” said Brian McNoldy, a hurricane researcher at the University of Miami.

“If they aren’t moving along and they just kind of sit there, you’re going to get a ridiculous amount of rain.”

Sally strengthened late yesterday, with sustained winds reaching 90mph. The National Hurricane Centre expected the hurricane to weaken slightly, from Category 2 to 1, when it came ashore, but warned this would still bring the likelihood of “historic life-threatening flash flooding”.

This morning, the Centre upgraded its advice and said that Sally had intensified to 105mph and a new advisory would be issued shortly.

Heavy rain and surf pounded the barrier island of Navarre Beach, Florida, on Tuesday and road signs wobbled in the wind.

Stacy Stewart, a hurricane centre senior specialist, warned that floods could be deadly.

“This is going to be historic flooding along with the historic rainfall,” Stewart said. “If people live near rivers, small streams and creeks, they need to evacuate and go somewhere else.”

Forecasters warned Sally could unleash flooding similar to that caused by Hurricane Harvey in 2017 in swamping the Houston metropolitan area.

Mississippi governor Tate Reeves urged people in the southern part of the state to prepare for the potential for flash flooding. He said about 120 people were in shelters in Mississippi.