Limerick goalkeeper and city hospital-based doctor Donal O’Sullivan is this week’s guest on the Warriors podcast.

WHILE THE DEBATE continues about whether the 2020 inter-county season should go ahead or not, Limerick football goalkeeper and joint-captain Donal O’Sullivan is likely blocking out the noise. 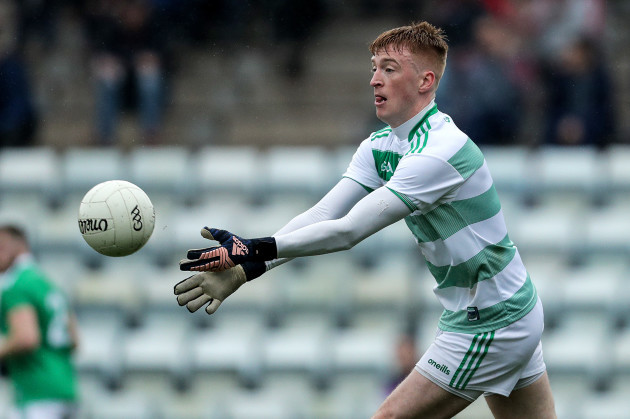 His job as a doctor in the city’s University Hospital sees him work a 24-hour shift today, before moving from the Covid-19 pandemic frontline into the middle of the action with the Treaty county on Sunday afternoon.

O’Sullivan will be between the posts as his side return, welcoming Wexford to Rathkeale for their Division 4 National Football League meeting (throw-in 3pm).

And then it’s back to the hospital for another around-the-clock shift that evening.

Having spoken to The42 in March as the coronavirus crisis first hit Ireland, O’Sullivan is our guest on the Warriors podcast this week.

While delving deeper into how stressful and challenging a time it has been, the Monaleen clubman gives a brilliant insight into life working on the frontline and how balancing his work and GAA commitments has gone.

“It’s been an up-and-down six or seven months,” he tells The42′s GAA editor Fintan O’Toole. “It’s been challenging, but you’re seeing good aspects of frontline workers working hard to do their best in the circumstances.

“I’m training to be a GP and I’m doing my paediatrics rotation at the minute so I started in the maternity in Limerick this week. As part of the paediatrics rotation, we’re doing nearly two 24-hour shifts a week, which is intensive in so far as it’s a gruelling schedule and then trying to juggle inter-county commitments at the minute, it’s a challenge but it’s something that I’m trying to tackle. It’s a tough old schedule.

“I wouldn’t know Jack McCaffrey now but I’m aware that he’s on the paediatric scheme. I’d imagine that would be a contributory element potentially to him taking a year off.

“For me, I have only another three months of it so there’s light at the end of the tunnel and my hours will start to become a bit closer to 9-6 but if I had to do this for an extended period, for four to six years, I couldn’t imagine continuing trying to play inter-county football.”

With The Big Return of GAA action going ahead this weekend — for now, anyway — O’Sullivan has enough to be thinking about away from the inter-county arena.

His hectic schedule is a “challenge,” but he stresses that it’s not something that he dwells on. Especially not this weekend. 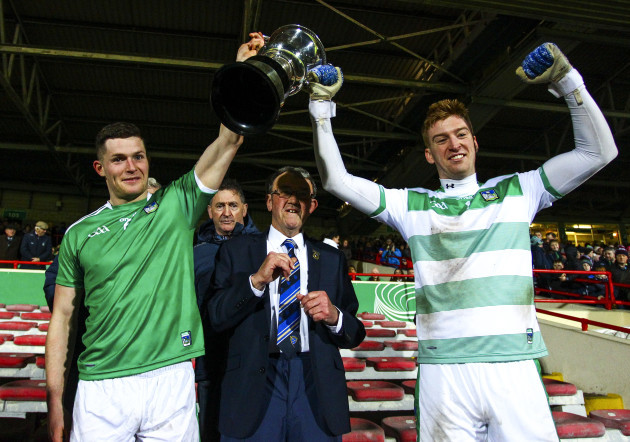 Lifting the McGrath Cup with Iain Corbett in January.

“It’s not an excuse now, it’s part of work and it’s something I have to do for this three-month period in particular. I have a 24-hour shift coming up on Friday and I’m trying to get mentally-fit for the weekend. It’s sub-optimal basically, but you can’t make excuses in that regard, you just have to get on with it.

“Even say, I’m due to work Sunday… in the maternity, there’s six junior doctors of my rank — I’m a senior house officer, an SHO. Where there’s seven 24 hour shifts in a week, there’s six of us that can do calls so at the minute. I’m still trying to juggle trying to get off for Sunday.

“Hopefully I’ll have it nailed down, but you’re kind of relying on colleagues being very understanding to hopefully get something arranged to do the day shift. Then I will take over at maybe at six o’clock and work for the rest of the night.

“It’s okay to do it in the short-term to medium-term, for say a six-month period but I couldn’t foresee myself if I had to do this for another four or six years… if you were training to be a hospital doctor. I couldn’t see myself continuing on playing inter-county.

“It is a bit of a challenge to juggle everything at the minute.”

In a fascinating conversation, O’Sullivan talks about how therapeutic it has been to keep a journal of the last seven months, why he was so happy to go back playing Gaelic football and how much he’s looking forward to the GAA county season ahead with Limerick.

He also tracks his career from medical school to the ward to the field, and shares his gratitude for the level of public support he and other frontline workers have received.

To listen to the full interview and listen to a 27-episode back catalogue featuring the likes of Bernard Brogan, Stevie McDonnell, Bríd Stack, Zach Tuohy, Ken McGrath and Johnny Doyle, subscribe at members.the42.ie.