The government provided details on the new arrangements for air travel at a press conference today.

THE GOVERNMENT HAS said it will expand the Green List from Monday as it’s set to change its travel advice for a number of countries.

It comes after it earlier said it will broadly support the European Commission approach on travel going forward, which is set to come into effect next month.

Ryanair, however, has again criticised the government and said the Green List must be changed today as Ireland has been kept “locked up like North Korea”.

Taoiseach Micheál Martin made the announcement today as part of a wider suite of measures for the country to cope with Covid-19 over the next six months.

When the European Commission system adopted, it will mean a significantly different approach to the current guidelines on air travel in and out of Ireland. Until then, the Green List is set to be expanded.

In late July, the government agreed a so-called Green List where people could travel to and from without the advice to restrict their movements for 14 days afterwards.

The government was criticised for its messaging on the Green List, and this was encapsulated by a remark from the Tánaiste that “it may not be simple, but it is straightforward”.

Until the new EU system is in place, the government will amend the Green List from Monday to include countries with an incidence rate of less than 25 cases per 100,000 in the past fortnight. This should include countries like Germany.

Health Minister Stephen Donnelly confirmed to RTÉ’s News At One that the Green List would be expanded to include other countries this Monday.

Ryanair has been sharply critical of the government’s approach to travel during Covid-19, and launched legal action in relation to this.

It said in a statement today: “We need Ireland’s Green List updated TODAY and include all lower Covid case EU countries including Germany (22), Sweden (22) and Poland (18). Irish aviation and tourism cannot delay another week or month (to Oct 13) while Micheál Martin dithers and delays or while NPHET mismanages Ireland’s test and tracing system.

“Irish aviation and jobs are being sacrificed to cover up NPHET’s failure to keep our Covid rate as low as Germany and Italy, both of whom have allowed intra EU air travel since 1 July while NPHET has kept Ireland locked up like North Korea.”

Its CEO Pat Dawson said: “We were disappointed to hear that there will be no further updates on the travel industry until 13 October, a whole month away from now. We believe that the Government are simply postponing outcomes, and putting the Irish travel industry on the long finger, which will lead to another month filled with stress and uncertainty for our member travel agents. A lot can change in a month.”

Last week, Ryanair urged the government to follow the coordinated approach to travel across the EU adopted by the European Commission last week.

These proposals will establish a common criteria and thresholds for EU member states when deciding whether to introduce travel restrictions.

It would also provide mapping of common criteria using an agreed colour code, and a common framework for measures applied to travellers from high-risk areas.

The European Commission suggests that EU States should not restrict the free movement of people travelling from another member state where the total number of newly notified Covid-19 cases is equal or less to 50 per 100,000 during a 14-day period, or the percentage of positive tests from all Covid-19 tests in a given area is less than 3%.

The latest official figures say that Ireland has 46.8 per 100,000 population in the past fortnight.

The European Commission suggests that anyone coming from certain designated areas that are more adversely affected by Covid-19 should either quarantine or undergo a Covid-19 test upon arrival to a country.

That means, if the guidance came in tomorrow, people who live in Ireland would be allowed to travel to or from, for example, Germany and Sweden for any reason (including holidays) without having to restrict their movements on either side.

However, if someone was to go to, for example, Spain or France, for any reason, they would be asked to restrict movements for 14 days or be tested upon arrival.

Countries and areas will be designated a colour code (green, orange, red or grey) and this will be updated each week by the Euriopean Commission. 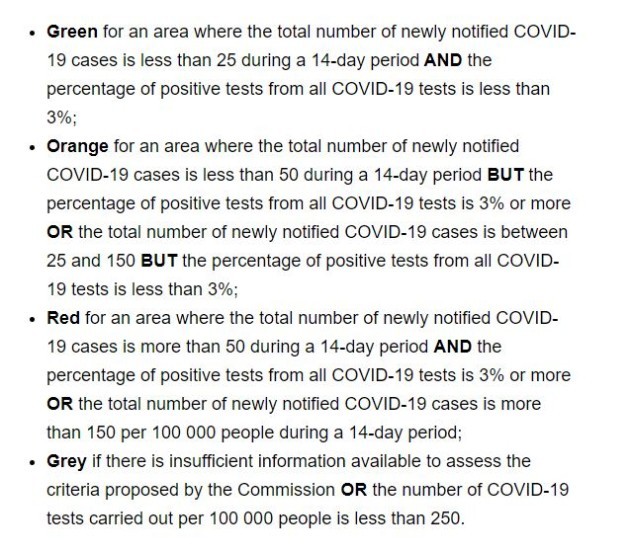 The Taoiseach said that travel advice from the Department of Foreign Affairs will be updated in line with proposed European framework.