Commentary about Prime Minister Boris Johnson’s cabinet reshuffle has largely missed the point in the British media. This is the real Boris Johnson standing up, not some cack-handed mishandling of “the colleagues.” 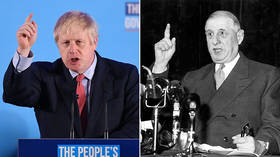 No more primus inter pares, just primus and the pygmies.

Dirigisme is an economic doctrine in which the state plays a strong directive role as opposed to a merely regulatory or non-interventionist role over a capitalist market economy, and the word is French because the concept drove the French Gaullist governments from the general onwards.

How ironic that as Britain leaves the European Union, it kicks off a thoroughly continental era of economic governance. The first majority Johnson government is thus not a government of the ‘right’ as some fools claim, but a government of the ‘left’ – themselves of course thoroughly French concepts arising mainly from the seating arrangements in the first French revolutionary assembly.

In just the last week, Boris Johnson has committed to £100billion of public expenditure, having earlier announced plans to renationalize a further part of Britain’s rail network. This on top of giving serious consideration to a 20-mile bridge over the North Channel linking Scotland with Northern Ireland – surely billions of pounds of state investment.

Thus, the deliberately provoked removal of Chancellor of the Exchequer Sajid Javid was not just a concentration of power in the hands of the prime minister, it was the ejection of a keeper of the Thatcherite flame of pure austerity politics. Javid was not to be allowed to develop the kind of disruptive blocking power ‘enjoyed’ by Phillip Hammond, his predecessor, still less the kind of dual premiership ‘enjoyed’ by Gordon Brown relative to Tony Blair.

The new chancellor, a billionaire boy of 39, Rishi Sunak, not even a household name in his stately home in the North, a complete ingenue who has accepted the PM’s (and his chief aide Dominic Cummings’) hegemony over economic policy. ‘Richi’, as he will come to be known, will be left to count the money – at which he is presumably proficient.

There are two, possibly three drivers of this surprising new turn by a British Conservative Party.

The first is Brexit. This project requires a new patriotism to be built to replace the globalism of the European adventure. Thus, huge projects of national prestige will likely be undertaken – and to hell with the cost of them. One of the most pitiful consequences of this turn is that it has left the opposition Labour Party squealing about “prudence” and “can we afford this?” like conservative maiden aunts having a fit of the vapours.

The second is the Conservative storming of the Red Wall of traditional Labour areas of the Midlands and the North. Johnson knows that traditional Tory policies will not hold these areas, which are in dire need of public investment, job creation and rises in real wages. The loss of these areas would mean the end of the Boris premiership and he has no intention of demitting office at least until he has become the longest serving British prime minister of the last hundred years.

Labour’s opposition to budget-busting bouts of public investment, huge prestige projects, bridges, airports, viaducts, dams and railroads looks ridiculous enough. Wait ‘til they realise that Johnson knows that 20-year projects are one thing, but elections come around every five years. The sacking of Esther ‘McVile’, or McVey to give her proper name, clears the way for Johnson to scrap the hated Universal Credit scheme she has been piloting for claimants of benefits in Britain. Millions of them. If Cummings is as smart as people say he is, he will now be advising Boris Johnson that putting money directly into poor people’s pockets and right now is the very best way of buying votes.

And if there is a third driver of this U-turn, it is the personality of Boris Johnson himself. He likes U-turns and has made many of them to his own advantage. A recent admirer of President Putin, he metamorphosed into the most brutish Russophobe on being made foreign secretary, and he may not be finished turning on that one.

The man who once said he avoided travelling to New York because of the “high risk of running into Donald Trump,” effortlessly became his best friend when it suited him.

Boris Johnson has principles, like Groucho Marx once put it, and if you don’t like them, he has others.

This is the first week of the populist government of Alexander Boris de Pfeffel Johnson. Hold on to your hats, there are many surprises to come.