Daniel Taylor, a veteran of many of Alex Ferguson’s infamous press conferences, is our guest on the latest episode of Behind the Lines.

AMONG DANIEL TAYLOR’S many accolades is an unwanted one – only the BBC spent longer banned from Alex Ferguson’s press conferences.

Taylor, formerly the Guardian’s chief football writer and now senior writer at the Athletic, is our guest on the latest edition of Behind the Lines, our sportswriting podcast exclusive to members of The42.

(Each episode of Behind the Lines features a lengthy interview with a sportswriter about their career and their favourite pieces of writing, and to gain access to a 46-episode back catalogue, head over to members.the42.ie.)

Taylor was excluded from Ferguson’s pre-game Friday press conferences for six years for having the audacity to write a book about Ferguson and United, which Ferguson didn’t read.

The book is called This is the One, in which Taylor wrote a two-year diary on what it was like to cover United and Ferguson.

The book covered a particularly eventful time at United that included the arrival of the Glazers at United and Mourinho at Chelsea; Ferguson’s fall-outs with Roy Keane and Ruud Van Nistelrooy; and sedition from a section of the United support against Ferguson. (To illustrate how Ferguson’s stock had fallen at United at this time – he was linked with the Irish job that was eventually handed to Steve Staunton.)

Taylor wrote to United to inform them he was writing the book – but the club didn’t tell Ferguson. When it was published a member of the press team read it on Ferguson’s behalf and told him the book was fair and accurate…but Ferguson banned Taylor anyway.

“They never told him, so when the book came out, in Fergie’s eyes – and I do get this – he saw it as a deception on my part, that I had sat there for two years compiling a book that he never been told about”, says Taylor.

The ban didn’t include games or Uefa-mandated Champions League pressers, and the fact they were covered on MUTV meant Taylor wasn’t totally hamstrung, but it was hardly ideal.

“Banning me was pretty ridiculous. I mean, I’m bound to say that, but I think any reasonable person would probably think the same. I think it was his way of telling other people, ‘Don’t you get the idea of doing this.’

“It was possibly financial – ‘How dare you be writing books about me when I’m not making any money out of it.’ He was very financially driven, there’s no getting away from that.

“I know lots of managers who ban journalists, but didn’t perhaps turn it into the kind of game that Fergie did, where it was almost part of the process. It was always in the back of your mind, ‘Will this get me banned?’ I was working for The Guardian, who were quite understandable. But at some papers, if their person got banned for a long time, it could jeopardise their jobs.

“When I first wrote to United about the book, I did get a reply saying, ‘Thank you very much for letting us know, good luck with everything, hope it sells well.’ That, to me, was a green light. So obviously, it was all very sort of startling to find out that all of a sudden, I was out on my arse.”

Reflecting on the days before his ban, Taylor says those Friday press conferences with Ferguson were the highlight of his week.

“And these are the days before press conferences were filmed.  When I say terrorise, I cannot even begin to put into words what he was like when he lost his temper. It was like something I’ve never, ever seen before. And I doubt we’ll ever see, again. It was just…ludicrous. His temper was just off the scale. That’s the only way I can describe it. And he also had this remarkable knack: he could just switch it on and off. Within 20 seconds, he might be laughing again. I’ve seen like grown men offering to chuck themselves out press conferences, because they’ve been worn down by it.”

Among the days Ferguson was at his most inscrutable was the day the club sacked Roy Keane.

“There had been all the stuff about Keane and the MUTV interview and all that, there had been friction behind the scenes, but it had kind of died down and there was talk of Keane getting a new contract.

“The first few months of that season had been proper conflict. Every Friday press conference ended up with him yelling at people, and on trips away there were [incidents]of  people being told that they were going to be left abroad, that they weren’t going to be welcome to get on the plane back. Ridiculous sort of scenes.

“But on that Friday, Fergie was in an absolutely brilliant mood. He was cracking jokes, and in one of those moods where you genuinely enjoyed his company.

“He was like a brilliant, brilliant actor, as they literally sacked Roy Keane an hour earlier. And he was making jokes about Scotland winning World Cup, classic Fergie stuff. We were left thinking, ‘This is fun, we didn’t really get a great story out of it, but equally, it was all good.

“I can still remember us being there, 15 minutes after Fergie had shooed us out and it dropped on the wires that Roy Keane had gone. He just absolutely had us. We were getting calls from our newspapers saying, ‘What’s going on?’

“And we were just utterly stuffed.”

Keane was one of a series of high-profile fall-outs Ferguson had in this time, along with the likes of Beckham and Ruud Van Nistelrooy. The relationship between Keane and Ferguson remains fraught to this day, however, and it’s a dynamic that still intrigues Taylor. 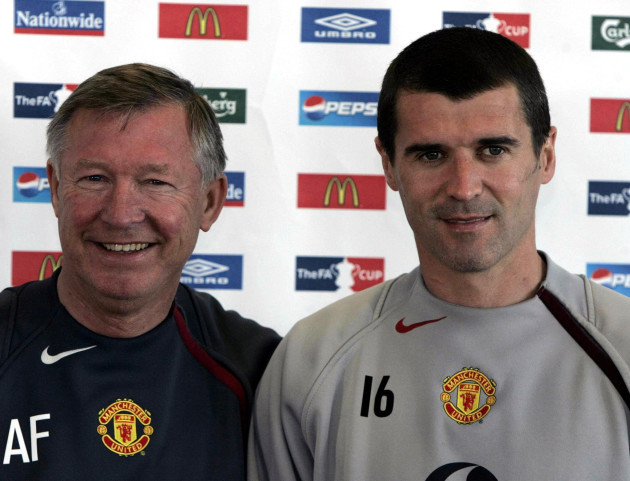 Ferguson and Keane in happier times.

“Fergie has a great way of sort of just thinking this is all part of the game. Fergie, despite how hard and ruthless he is, is prone to making up as well. He fell out with Beckham, Gordon Strachan, and all these people, and he’s kind of made friends with a lot of them, because he sees it as all part of the game.

“I think Roy Keane is genuinely kind of hurt, and I think Fergie has probably moved on with his life. Funnily enough, once, after all this had happened, I was coming back from Paris, I think PSG had been playing a European game. Roy Keane was doing the TV comms, and Fergie was there in some sort of Uefa role.

“I remember the drama of watching these two people getting on the same plane. They were both in the plush seats at the front of the plane. Keane stood in another part of the terminal: if we were meant to be boarding at gate D33, he went to gate D35.

“He stood with his arms folded, just staring. Fergie was with his wife. I got on and I was I was in the cattle class, but fortunately, I was quite near the front, so I could get a good view.

“I was thinking, you know, ‘Christ, anything could happen here, I’d better try and be professional before the curtain is pulled’, and very disappointingly, they just completely shunned each other.

“Fergie looked over the top of his newspaper and Keane sat staring out the window. I mean, they were literally eight or nine feet away from each other and and as soon as the plane landed, Keane got straight off.

“So I don’t think that one will ever be resolved, to be honest.”

Listen to the full interview by subscribing here.