‘It nearly feels like I’ve been given back my sporting career.’ 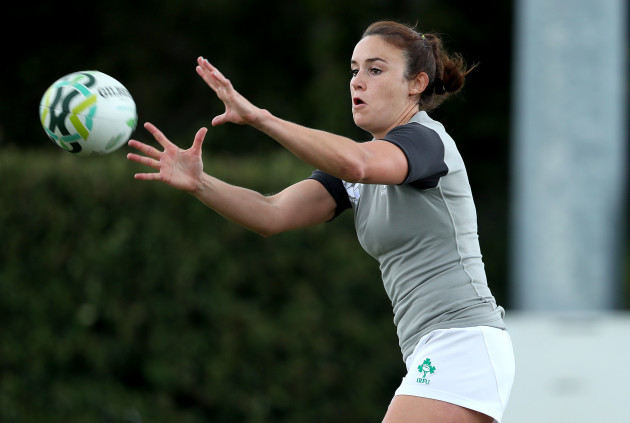 LOUISE GALVIN HAS played high-tempo, high-exertion, sprint-heavy matches in the heat of southern France, in Dubai, in Sydney and at altitude in Colorado.

So when she exhales a ‘whew’ while recounting hot working conditions in another, quite different, kind of field you can help but feel the temperature soar.

Galvin last week announced her retirement from Ireland’s Sevens rugby set-up. The end of what amounted to a long goodbye imposed by the pandemic.

Team training in the IRFU’s high performance centre in Abbottstown was off the table from March. So the Kerry woman, a physiotherapist by trade, used her new-found free time and stepped forward to join the front line of medical care. Galvin took on work in and around the intensive care unit of Tullamore’s Midland Regional hospital, aiding the rehabilitation of people suffering the after affects of Covid-19.

“I certainly don’t consider myself any sort of hero,” Galvin interjects to The42, she didn’t pull on the layers of PPE for any summer night’s applause.

“Like, I was getting paid for it! I wasn’t a volunteer.”

Loathe to let the time drift by, Galvin took her talents to Tullamore from April to September. Training for elite international competition continued in near solitude. Gym sessions, running sessions were all ticked off during her time away from the ICU.

“I found myself lucky. I hate being idle,” she says.

“Why not me? I thought I was more ripe and ready to go in than anyone else outside.

So many people feel helpless during the pandemic. Helpless for themselves and helpless about society. I was lucky enough that my qualifications meant I could do something directly.”

“It’s the patients I always felt completely sorry for. Coming off the ventilators and they’re drugged up. all you want to do is show them a friendly face, and you can’t.”

Can’t, because of the veritable haz-mat suit that healthcare workers had to don in order to keep themselves safe and healthy to fight another day, for another round of patients.

“There were some hot days in that ICU. I remember the sweat rolling down my back at different times, between the PPE and the heat – they were trying to avoid aerosol generating, so the air-con was off… but listen, it was an experience.”

Amidst that experience, Galvin did not yet know that she had played her last international game of Sevens rugby. At 33, the end of that road was in sight, sure. But not imminent.

The World Series had been suspended in March with initial plans projecting a resumption after September. Then the 2020 season was cancelled and the planned November start to the 2021 season also fell away.

Galvin had a decision to make. Stick, wait, pick up locum work where she could and hope the pandemic would ease enough to allow multiple national teams to converge into a single stadium for a tournament.

“If I was in the middle of my (rugby) career I’d take this as an opportunity to further my off-field career while I’m waiting for tournaments to start again. But at the tail end, I was running out of time and things are way out of my control.

“So it was time to step back into the big bad world of full-time employment.”

Galvin jokes that her evening, either side of this interview, is now centered around laundry and grocery shopping. Last month she began full-time work as a primary care physio in Dublin South-East. Galvin’s work and focus now revolves around helping the elderly and infirm, if not literally get on their feet, then to use them for longer periods of time than they felt able to during a lengthy cocooning period and lockdown.

”It’s like collateral damage from the pandemic,” she says passionately.

“So many older people have been cocooning and they’re afraid to leave their house, they’ve lost mobility and gotten very de-conditioned.

“Ireland’s population is ageing all the time and we have more and more people living above that 75 age bracket.

“Working in that area, helping that type of patient to stay mobile, stay active. Get them used to being outside again, doing exercises in their homes.

“It’s completely different to being in an ICU, going to people’s homes.”

And completely different to working in an elite team environment.

The stakes are higher, lives and their quality are on the line rather than numbers on a scoreboard. Yet the scrutiny, pace and pressure is lower.

Galvin always carried perspective for where sport and games stood in hierarchy of what to worry about, but shifting the focus so quickly from one to the other can only feel jarring. 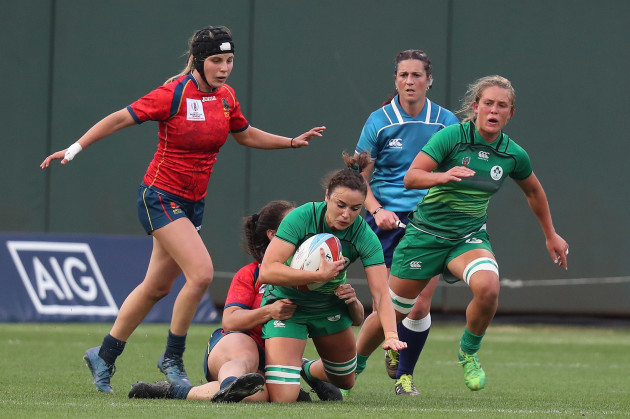 Galvin is tackled during the 7s 2018 World Cup in San Francisco.

“It’s so unimportant to everyday life, running around and chasing that little piece of leather. Yet we train and train. We watch it back and genuinely try to do more or better than we did yesterday.

“You’re watching games back from multiple angles, digesting stats and in the grand scheme of things, it doesn’t matter at all. But when you’re doing it it’s bigger than anything else.

“Nobody’s going to be doing video analysis on my treatment sessions.  I’m sure that could be nice…”

In Sydney last February, Galvin played the last of her 30 Sevens tournaments for Ireland. In the five years since she first lined up in a developmental Ireland squad, she has scored 22 tries and played 96 matches while helping a young team claim a foot-hold on the world stage.

On Friday, she was back where that rugby journey all started, lining out for UL Bohs in their Energia AIL Community Series win over Shannon/LIT. It was through her time with Bohs that Galvin first grabbed the attention of the national team coaches, stepping forward to test her athletic prowess on the talent identification days the IRFU held to ensure the Sevens setup would be given the best possible start. 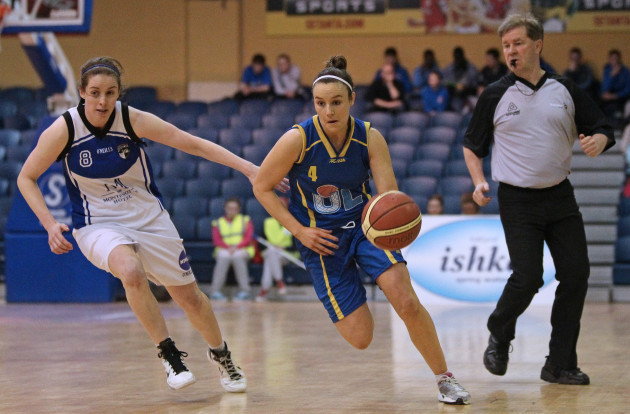 Galvin playing with UL Huskies in 2012.

In her farewell to the sport on Instagram last week, Galvin describes leaving ‘a permanent, pensionable job’ so she could pursue a career playing sport at the highest level. It was a leap of faith. Faith, not least in her own ability.

“It sounds mad, leaving a job in Limerick to move much further away from home, to a much more expensive place, give up the sports I’m playing and take a wage cut. But you get access to all these high-performance facilities, staff and basically get to train full-time and get a bit of time for part-time work.

“I was 26-27 so I was thinking, ‘this is the time to do it’. I figured I’d try for a year, took a year-long career break and then took an extension. Then it was a case of come back or keep going. I was just enjoying it too much. So I said ‘I have my degree, I have a decent amount of experience as well’. There’s a finite amount of time (I can play 7s) so I’ll try and maximise as much as I can for myself.

“You might not get paid an awful lot, but I feel all the richer for having done it.  Stepping out of my comfort zone.”

The only drawback for Galvin, it seems, is that taking the salary from the IRFU meant she had to stall her participation in other sports.

She was internationally-capped in basketball and an inter-county star with Kerry long before she travelled the globe representing Irish Rugby. So the question about ‘why’ she would take that paycut, move further from home and out of her field of study to pursue a sport she had no great experience in falls flat.

This was a chance to fulfill an ambition she could never have even dared to dream about. Getting paid to play sport has always been a visible goal for young boys. Girls could see far fewer women performing at the highest level.

“Growing up, the biggest enjoyment I got was chasing a ball, whether it was a football or a basketball or whatever it was.

The only people I remember growing up being female sports stars were Sonia O’Sullivan and Michelle Smith – and I knew I could barely swim and wasn’t very good at running.

“So I knew, ‘you’re not making a living from this, but play with a few teams at the weekends if you want’.

“I felt if these coaches (led by Stan McDowell) feel I can perform at international level, then why not give it a go and see. If I don’t I don’t, but luckily it worked out okay in the end.”

Galvin was thriving as a stalwart of Anthony Eddy’s international set-up until Covid-19 took hold of the globe and choked world sport to a standstill. And after feeling a sympathetic affinity for individual athletes as she trained without her team-mates over the spring and summer, she is thriving again after hanging up her boots.

Because, of course, she has not hung up any boots. In fact, she could probably do with a new pair and few more variations of stud length.

Her weekday evenings bring her up and down the road to train with UL Bohs and also back home to her Gaelic football roots with Finuge/ St Senan’s. She helped her home club claim a county title a fortnight ago and yesterday played in the Munster quarter-final loss to Clonakilty.

Friday night rugby, Saturday football. Safe to say, ‘retirement’ is not the right word for her current athletic status. 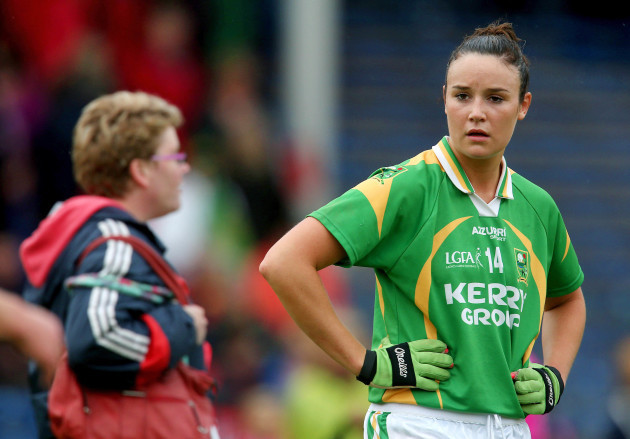 Galvin on Kerry duty during the 2013 Championship.

“I don’t mind running compared to some of the other players. But it gets so monotonous, you’re nearly just passing the ball to yourself. I was just mad to get back to any training.

“When I did make the decision to finally step away, it meant that I could start AIL club training, football training. I was like a newborn calf running out on the pitch.

“I just had this buzz from it. And I still probably train, maybe not to the same intensity, but as many days of the week. I travel down to Bohs on a Wednesday night for club training. And I try and get down to football on a Friday night, straight after work.

“Just having the odd game has been absolutely awesome.

It’s been strange, it nearly feels like I’ve been given back my sporting career.”

“Lockdown took away all of it and made us realise, when you are playing a team sport, how much you rely on it for the enjoyment. Not just the competing.”