Leicester recorded 866 new cases of the coronavirus in the last two weeks – leading to speculation the city will be locked down again.

THE COVID-19 PANDEMIC has been an “absolute nightmare” and a “disaster” for the UK, Boris Johnson has said, as he promised a “whack-a-mole” strategy to tackling local flare-ups of the virus.

The British Prime Minister told the newly launched Times Radio he wanted to set out a plan to “bounce forward” following the pandemic.

“This has been a disaster, let’s not mince our words, this has been an absolute nightmare for the country,” he said.

“The country has gone through a profound shock. But in those moments you have the opportunity to change and to do things better.

“We really want to build back better, to do things differently, to invest in infrastructure, transport, broadband – you name it.”

Johnson said there will be “some bumpy times” ahead but the UK will get through the economic fallout, adding that people “instinctively” knew it would be tough.

“We’ve seen a big fall in our GDP and everybody understands as we come out of it there are going to be some bumpy times but the UK is an amazingly dynamic, resilient economy and we’re going to come through it very, very well indeed,” he said.

The PM insisted now was not the time to “step back” from supporting the economy, adding: “The government will remain very, very much engaged with people, with businesses helping everybody to get through this.

“We had to put our arms around the UK economy, we had to do the coronavirus job retention scheme, the furlough scheme, all sorts of amazing loans, bounce-back loans and so on, to help businesses, we can’t just now step back.

“So what we’re going to be doing in the next few months is really doubling down on our initial agenda which was all about investment, if you remember, in infrastructure, in education, in technology, to bring the country together.”

Johnson said an economic effort like the one enacted by former US President Franklin D Roosevelt in his New Deal out of the Great Depression was now needed.

The prime minister acknowledged he had been “very lucky” in his recovery from Covid-19 and said the experience had given him an “even deeper love and admiration for the NHS and everything they can do”.

But he said he worries about coronavirus deaths and infection rates every day, adding that it was vital to be ready to crack down on local flare-ups.

“Local hospital admissions are coming down, so are the death numbers,” he said.

“They are much, much lower than they were a few weeks ago and that is encouraging, but the crucial thing is to make sure we are ready to crack down on local flare-ups. We have a whack-a-mole strategy.”

Johnson’s comments come after Leicester recorded 866 new cases of the coronavirus in the last two weeks – leading to speculation over the weekend that the city would be locked down.

City mayor Sir Peter Soulsby told LBC he was “angry and frustrated” that a meeting with government officials scheduled for 9am today had been cancelled.

He said a document sent to him by the government at around 1am had “very little substance” and only suggested that restrictions due to be lifted for the rest of the country on 4 July should remain in place for Leicester for an extra two weeks. 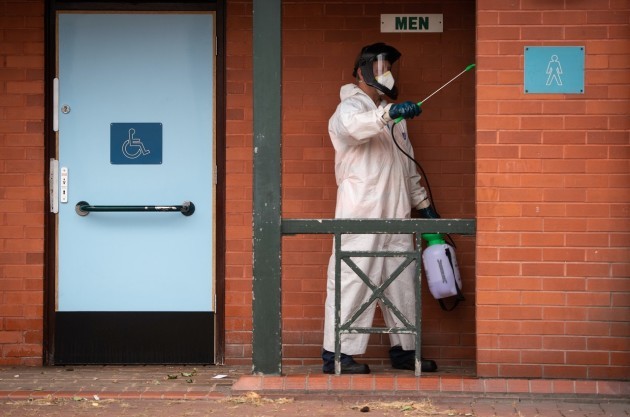 A worker for Leicester City Council disinfects public toilets as the city may be the first UK location to be subjected to a local lockdown.

He said there was “incredible frustration” in getting figures out of the government “after weeks of asking”, adding that some officials had visited Leicester, “talked to a few people” and had then “cobbled together” a report.

He also told BBC Radio 4’s Today programme of his anger, saying: “It was only last Thursday that we finally got some of the data we need but we’re still not getting all of it and it was only at 1.04am that the recommendations for Leicester arrived in my inbox.

“I’ve looked at this report and frankly it’s obviously been cobbled together very hastily. It’s superficial and its description of Leicester is inaccurate and certainly it does not provide us with the information we need if we are to remain restricted for two weeks longer than the rest of the country.”

Leicester public health director Ivan Browne was also critical about the level of information given to the city to tackle the outbreak.

He told the Today programme: “I don’t think at the moment we’re seeing a single cause or a single smoking gun on this, so we need really try to dig down and find out what is going on and it’s likely to be a combination of factors.

“Information has been challenging all the way through this.”

Labour MP for Leicester East, Claudia Webbe, said she believes a local lockdown is necessary for her constituency due to risk factors for Covid-19 including poverty and “significant levels of African and Asian minority ethnic communities”.

Yesterday, Home Secretary Priti Patel, in interviews with broadcasters, appeared to confirm Leicester would be locked down. But Jonathan Ashworth, Labour’s shadow health secretary and Leicester South MP, said Patel had “got slightly in a muddle” about a possible lockdown.

He said he had spoken to Health Secretary Matt Hancock, adding: “I don’t believe a local lockdown in Leicester is about to be proposed.”

It comes as restrictions are being eased elsewhere in the UK, with parks and shops with outdoor entrances able to reopen in Scotland, and schools in Wales welcoming more pupils.

The Welsh government said schools will operate with staggered starts and breaks for “check-in, catch-up and prepare” sessions starting today.