Join TheJournal.ie and a panel of experts on Friday to explore another way the coronavirus pandemic has changed our lives. 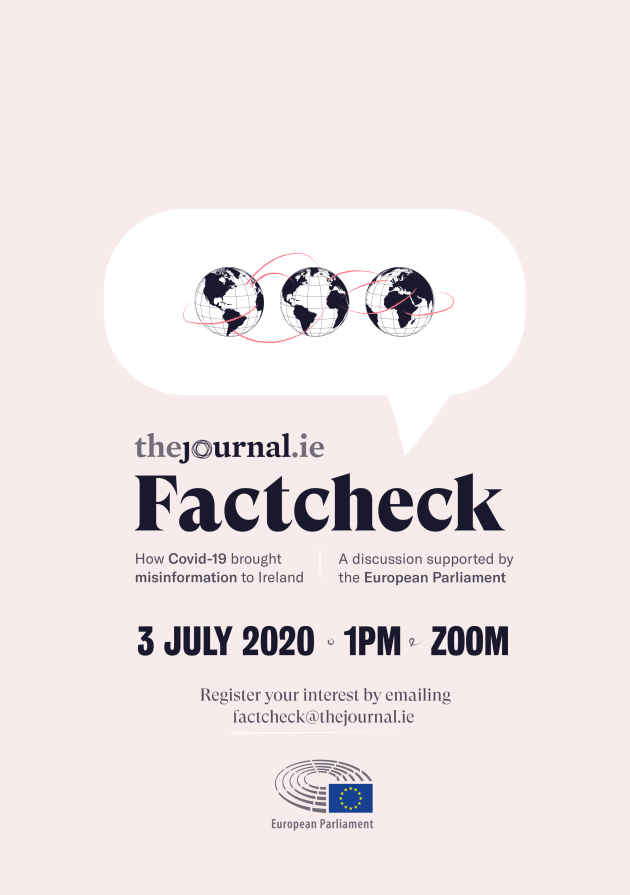 HAVE YOU RECEIVED WhatsApp messages about an army red status lockdown in Ireland; links between 5G and the pandemic; tea being a cure for coronavirus; and holding your breath being a simple test for Covid-19 over the past few months?

You weren’t alone, of course.

Viral messages, mostly sent via the messaging app but also appearing on other social media platforms, were a major feature of the global crisis.

The World Health Organization has said we’re not just in the middle of a pandemic, but also an infodemic – identifying as a major problem the sheer volume of information citizens are being asked to digest right now.

Since the first case of coronavirus was confirmed in Ireland on 29 February, TheJournal.ie has been at the forefront of that battle against misinformation in Ireland.

An accredited member of the International Factchecking Network, it collaborated with other factchecking organisations across the world as part of the #CoronavirusFacts Alliance.

In the past four months, the team at TheJournal.ie has debunked or factchecked 83 myths and claims – including one false screenshot which reported we were closing down (we’re not).

Many other countries have grappled with fake news for a much longer time (see Brexit and Donald Trump’s election) but Covid-19 brought misinformation to Ireland on a scale not seen before.

What were the biggest false stories and how did people fall for them? How did Ireland compare with the rest of Europe? And is this level of misinformation something that Ireland will now have to live with?

TheJournal.ie, with the support of the European Parliament, is holding a discussion to examine these questions – and look at how and why this all happened. Deputy editor, and the lead of TheJournal.ie‘s FactCheck project, Christine Bohan will be joined on the panel by FullFact’s Nicola Aitken and MEP Billy Kelleher.

Aitken joined UK factchecking charity FullFact this year. Previously, she was the head of countering disinformation at the UK government department for digital, culture, media and sport.

Kelleher, an MEP since 2019, has written about how nefarious actors playing dangerous geo-political games are often at the root of disinformation.

We’d love for you to join us, via Zoom, on Friday 3 July at 1pm for about 90 minutes. Places are limited so sign up as soon as you can.

To attend, simply email [email protected] and you will receive a link to sign in to the Zoom call at 1pm on Friday.