Three other meat factories in Kildare, which is also under regional Covid restrictions, have temporarily closed.

A JUNIOR MINISTER and Fianna Fáil TD has called on the Carroll Cuisine meat factory in Tullamore, Co Offaly to immediately halt their operation to prevent transmission of the virus.

The factory is the only one of four meat factories not to have suspended production following the introduction of regional Covid-19 restrictions by Government.

Laois-Offaly TD and Minister of State at the Department of Finance Sean Fleming made the comments after O’Brien Fine Foods, Kildare Chilling, and Irish Dog Foods in Kildare announced they would not reopen this week.

It follows a spike in cases in Kildare, Laois, and Offaly in recent weeks which are mainly associated with clusters in meat factories. Government announced two weeks of regional restrictions on Friday to prevent further transmission.

Speaking to TheJournal.ie, Fleming said: “The reason is clear cut, it’s that there has been a lot of Covid in [Carrolls] Factory, as in the others, and the other three have taken a positive, proactive view and done the right thing and I’m calling on Carrolls to do what everybody else is doing.

“I’m asking them to make the announcement themselves today. What I will say is for Ireland to keep Covid under control we need solidarity to get people to support the effort and the fact that we have meat factories open in the area where the problem has arisen, possibly through no fault of their own… but we have a lack of solidarity and it’s not helping.

“We have meat factories open and shops and restaurants and hotels have to close.”

Carrolls Cuisine in Tullamore, Co Offaly had just 11 cases confirmed but Fleming suggested the factory should close to prevent those confirmed cases leading to further transmission.

TheJournal.ie contacted Carrolls Cuisine for comment but did not receive a response. 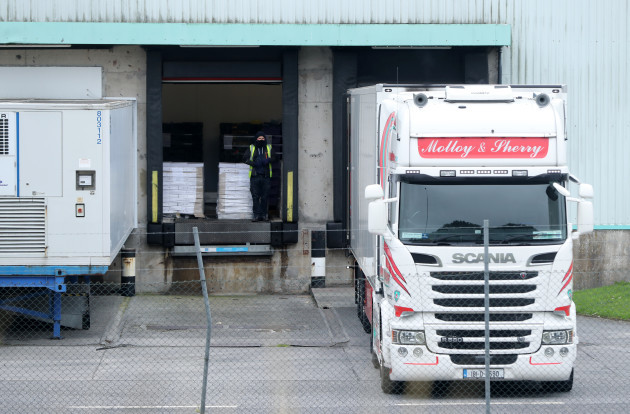 “I accept he numbers vary from factory to factory but they could increase, we’re in the middle of a spike, the spike in Ireland is getting worse than England at the moment. It’s not about the historic figures, we have to contain it. I think it’s in everybody’s interest that every meat factory with a case should close down.”

“I don’t really think it’s helpful for individual politicians to be falling all over each other to tell people to close their businesses – those decisions have to be led by people who are experts,” he said.

Varadkar also clarified that it depended on why you had been tested for Covid-19 whether you have to self-isolate until you receive the results.

If you don’t have Covid-19 symptoms, and you’re not a close contact of a confirmed case, but you’re waiting for a test result as part of a “sweep” across an industry, then “that doesn’t require people not to go to work”, he said.

Health Minister Stephen Donnelly at the weekend also said it is his view the factories should not reopen this morning in any of the three restricted counties.

More than 300 cases of Covid-19 have been identified at meat plants in the region in recent weeks.

While speaking on RTÉ’s Morning Ireland programme earlier today, the Tánaiste said: “Three of the four meat plants have closed, one hasn’t. There is an outbreak team involved with that meat plant.

“The power does exist under the public health legislation for the HSE to order businesses to close… I trust that public health officials who are involved with this and engaging with the plants will make the right decision if it is necessary to post a closure order.”

Trade union SIPTU and representatives of Meat Industry Ireland are meeting in Dublin this morning where concerns over the recent clusters, and the impact on staff, will be top of the agenda.

The meeting was agreed several weeks ago but no date had been set until early last week, just days before the most recent clusters in meat processing factories came to light.

The impact on staff, the closure of meat factories where large numbers were diagnosed with the virus, and how to ensure staff are protected into the future will now be a priority topic of discussion.

“We didn’t get invited to the Oireachtas committee even though Meat Industry Ireland was, and at that Oireachtas meeting they reluctantly agreed to meet with Siptu as representatives of the meat industry,” Siptu’s Greg Ennis told TheJournal.ie.

“It has become even more important now with the latest revelations on Covid in meat and food processing factories over the last few days.

We predicted [this outbreak]would happen on 23 June and we were right because the meat industry is the perfect vector for the spread of Covid.

“So we’ll bring Meat Industry Ireland up to date with what we believe are the vectors, the causes of this, and what we need to do to make sure [transmission]stops before anyone else gets infected.”

TheJournal.ie contacted Meat Industry Ireland for comment in relation to that meeting but did not receive a response at time of publication. However, in a separate statement this morning it said it has written to the HSE National Standing Oversight Committee seeking early engagement to facilitate the planning of testing at its member facilities.

Some of the other issues up for debate will be working conditions and sick pay.

Announcing its factory would be remaining closed yesterday, it said it will not be reopening for a period of 14 days in total and additional measures will be put in place to support a return to work for its employees.

“In line with public health guidance, normal operations will not resume for the 14-day incubation period – 4 to 18 August. In consultation with the HSE, our warehousing facility and minimal related operations will function at significantly reduced capacity levels to manage perishable goods,” it said.

“In line with public health guidance, in addition to testing undertaken to date, a further programme of employee testing will be conducted on days 7 and 14 (as necessary). Only those employees who test negative and meet public health guidelines in full will return to work. All staff will continue to be paid in full.”

A spokesperson for Irish Dog Foods said it has deferred reopening having already been closed for over two weeks.

“Irish Dog Foods has been closed since Saturday, 25 July 2020 following an outbreak of Coronavirus in the factory. We have worked closely with the HSE and followed their advice at all times,” a spokesperson said.

“Following the Government decision on the evening of Friday 7 August to introduce a number of public health measures for Kildare, Offaly and Laois, we have deferred the phased re-opening pending further guidance from Government and its agencies.”