Ballymun Kickhams are in Dublin SFC semi-final action this weekend.

OF THE FOUR Dublin SFC semi-finalists that will take the field this weekend, Ballymun Kickhams provided by far the most players to the Dublin squad that claimed the last five All-Ireland titles.

Dean Rock, James McCarthy, Philly McMahon, the Small brothers and Evan Comerford are all part of Dessie Farrell’s plans for the upcoming inter-county campaign, while others like Davey Byrne and Jason Whelan have represented the Dubs in the past.

Because of their high-profile stars, it’s often assumed that Ballymun is a massive club, but they’re dwarfed in size by the three other sides still in contention for the county title.

“I think Ballymun are perceived as a really successful club throughout the rest of the country,” says manager Brendan Hackett.

“You know, I get calls from people from all over the country, and the perception of Ballymun is they’re a really big club.

“How many members have Ballymun? 300. Phenomenal. I mean, it’s phenomenal.”

A documentary on the club aired on RTÉ earlier this summer highlighted how Sky Blue legend Paddy Christie helped raise the club off its knees.

While they enjoyed some success in the 1980s with Barney Rock to the forefront, but things started to slide in the ’90s as they battled relegation.

The club, which is based in an area that was better known for social deprivation and crime, was in dire straights at adult and underage level before Christie nurtured the next generation of stars.

During the documentary, McMahon estimated that Christie was responsible for some 20 All-Ireland medals won by Ballymun Kickhams players during Dublin’s period of dominance in the last decade.

“The country got to really see the work that went into Ballymun, and where they’ve come from, and that was great,” said Hackett.

“We saw it earlier in the year and obviously we enjoyed it, but it was great for the country to see a club that small can consistently [produce great players].

“I mean, go back to Barney [Rock], Dermot Deasy, Gerry Hargan, right through to Ian Robertson, Paddy Christie. Look at what the club have produced. Has any club matched that in the last 20 or 30 years? I don’t think so.

“I mean, you’d have to go back to the ‘70s when Vincent’s were really at it to see a club that has given so much to Dublin – from such a small base,” continued Hackett.

“I think it is phenomenal, what they’ve achieved. And the documentary showed where they came from, and it also showed what a couple of key people can do.

“People like Paddy, when you put your mind to something and really work hard at it – and stay at it. And that’s what we would have been pleased, that the country saw where the club has come from. It’s a young club, it’s only 50 years old, and what they’ve done in 50 years, I think, is incredible.”

Ballymun haven’t prevailed in Dublin since 2012, when they went on to lift the Leinster title and reach the All-Ireland final, but are seen as serial underachievers considering the star talent they possess.

But Hackett, who has been in charge since 2018, points out that the club have suffered because of Dublin’s success at county level.

“I said it after the last game – probably Dublin have benefitted hugely from Ballymun’s contribution really, and Ballymun probably haven’t got that benefit. 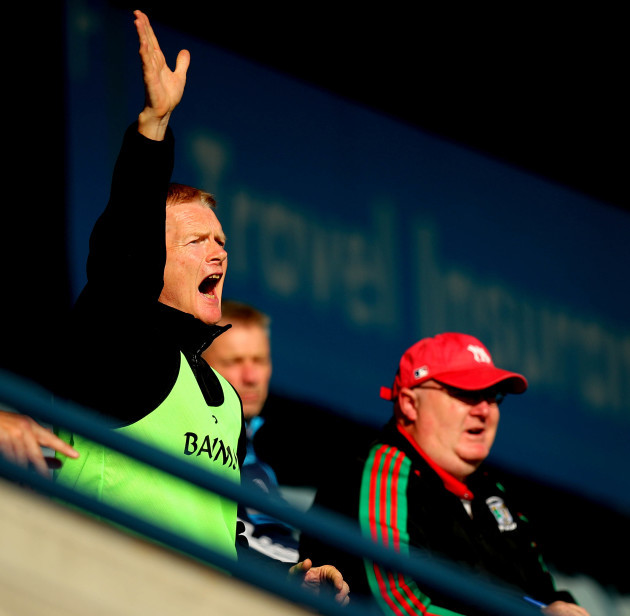 “I remember somebody saying to me, at the beginning when I started with Ballymun, the players that you see in June will not be the same players in September and October.

“Because it’s just simple exhaustion. Like, you look at any big event – I mean, look at people when they come back after the Olympics. They’re completely flat. After you win an All-Ireland it’s very, very hard – and I understand that.

“So, this year has been a huge change and, look it, you probably see a lot of calls now for a split-season and giving the club a chance. And I think there’s been some fantastic club games.

“I mean, from what I’m seeing on TV and what you’re seeing in the championship, club football at the top level is really, really good.”

In Hackett, Ballymun have a vastly experienced manager across a range of sports.

The Monaghan native was a noted athlete in his youth and he caught the coaching bug early. He started to work with teams when he was 19 and studying physical education Thomond College in Limerick.

By the age of 22 he was managing a Leixlip senior club side that contained Kerry star Jack O’Shea. He managed Longford for three years and Offaly for two before taking the role as trainer for the International Rules side in the ’90s.

He obtained a Masters degree in sports psychology in UL and worked with a number of international teams across various sports like including boxing and equestrian sports, in addition to high profile athletes such as Eamon Coughlan.

His work in sports psychology brought him to several European, World Championships and Olympic Games with Irish teams.

He established his own fitness training business 36 years ago which he still runs to the present day. He also spent three years as chief executive of Athletics Ireland before stepping down in 2008.

By the time he took over Westmeath for an ill-fated tenure in 2010, he estimated that he’d already worked with over half the counties in Ireland in lesser-publicised roles, including Roscommon, Sligo, Fermanagh, Limerick, Galway, Monaghan, Wexford and Dublin.

Hackett’s next role took him to Kildare where he managed a talented crop to back-to-back Leinster minor crowns in 2015-16.

Now Hackett is determined to get this talented group over the line in a unique campaign where the club and county seasons have been flipped.

“It’s the first time in my tenure here that you’ve had a full team to train with and pick from at all stages,” he says.

“Trying to fit in six players – look at it compared to this time last year. Ten days after the biggest event in GAA history, the five-in-a-row, you’re asking six players to come in and try and give of their best in the championship. It’s impossible – I don’t care who you are.

“And this year the difference is they’re there all the time. They’re fresh, they’re part of the team, they’re driving the standards – and that’s the big difference.”