Politicians in Northern Ireland criticised the large crowds who gathered for the funeral, despite pandemic restrictions.

A LARGE CROWD of mourners gathered in west Belfast today for the funeral service for veteran republican Bobby Storey.

The former leading IRA member died earlier this month at the age of 64 following an unsuccessful lung transplant.

Storey, from west Belfast, was a highly influential presence within the republican movement throughout the Troubles and subsequent peace process.

He spent more than 20 years in prison during the Troubles. He was sentenced to 18 years for possession of a rifle in 1981 and also spent several periods behind bars remanded on other charges.

As a teenager, he had been interned without charge, while in 1983 he was involved in a mass escape by republican prisoners from the Maze paramilitary prison near Lisburn.

The coffin was draped in an Irish tricolour. 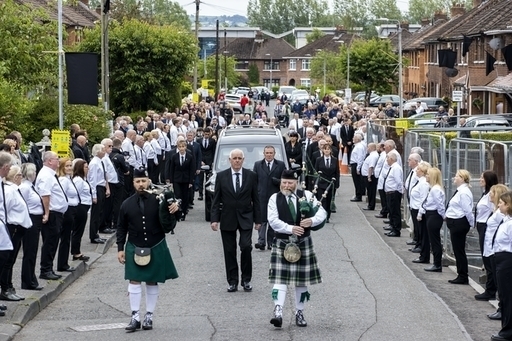 The funeral procession of Bobby Storey in Belfast.

Former Sinn Fein MEP and current Foyle MLA Martina Anderson was part of a guard of honour formed for Storey outside the church.

Speaking at the graveside, Adams accused Fianna Fáil, Fine Gael and the Green Party of forming a government to exclude Sinn Féin from power.

“They are entitled to do that, but their refusal to talk to the Sinn Féin leadership is a sad little undemocratic throwback to the way the unionist leaders used to behave.”

“They will fail. Just as the unionists failed in their exclusion policies,” he said.

Calling Sinn Féin an “open, democratic, national movement”, he said that “we are glad and we are proud that Bob and other former IRA volunteers are part of what we are”.

“We are proud of Bob and the others when they were IRA volunteers. They and their support base – our republican family, our community, republican Ireland – defeated the British army in this city and in these six counties,” he said.

Some politicians and figures in Northern Ireland have criticised the crowds at the funeral.

Coronavirus regulations in the North state that a maximum of 30 people are allowed to gather outdoors, with social distancing in place.

“Having watched families unable to attend funerals or be with their loved one as they passed away I think this undermines the credibility of our Executive Office,” he tweeted.

“In light of the fact that Ms O’Neill is today present with many hundreds of others at the funeral of Bobby Storey her position is untenable,” he said.

“Her conduct is grossly offensive and insulting to the many law-abiding people who have made the huge sacrifice of foregoing a normal funeral as they said farewell to family members who died recently.”

Naomi Long, the leader of the Alliance Party and Northern Irish Justice Minister, said that “gathering in crowds for any reason is dangerous”.

While not referencing the funeral or Sinn Féin specifically, she said: “As I have said too many times to count, I recognise that funerals are a sensitive issue. People want to pay respects to their loved ones and support the family in their grief.”

“But Covid-19 does not recognise any of that,” she said. “Many families have endured burying a loved one alone, to help save lives. When others ignore the rules, that compounds their hurt and pain. And when those who make the rules, break the rules, it is is more hurtful still for all who made huge sacrifices to obey the regulations.”

Fine Gael TD Jennifer Carroll MacNeill also criticised the crowds at the funeral. “Why are Sinn Féin preaching one thing about Covid-19 restrictions and then practising something else? Does Mary Lou stand over this?” she tweeted.

With reporting from Dominic McGrath