Health Minister Stephen Donnelly said it is important to reopen the economy, “but not at the risk of another wave”.

THE IRISH TRAVEL Agents Association (ITAA) has called on the Government to clarify the “mixed messaging” on whether people should travel abroad or not.

The ITAA said a clear decision must be made on whether international travel is permitted following Chief Medical Officer Tony Holohan’s plea for people to cancel holiday plans abroad over the coming months.

If the Government is advising people not to travel abroad, the association said, it should cancel all flights and ensure people are refunded.

At Monday’s briefing at the Department of Health, Holohan advised against all non-essential travel over the coming weeks and months.

“It makes much more sense to not go ahead with that booking and to risk travelling abroad, picking up this infection, risk for you, for any family member you be travelling with or indeed any close contacts you have,” he said.

He said of the 24 new cases yesterday, at least six were associated with international travel.

The Government has been intending to put in place ‘air bridges’ with countries with low coronavirus infection rates by 9 July, allowing people travelling between countries paired together to bypass quarantine in an effort to boost international tourism and allow more people to take overseas holidays.

“If the Department of Health, the Chief Medical Officer and the Department of Foreign Affairs wish to uphold these restrictions, they will have to support inbound and outbound tourism and compensate affected consumers – a decision must be made on this,” Dawson said.

“No one in the Irish travel industry is advocating unsafe travel, the response of the Irish people to the pandemic has been astounding, they are not going to start going on holidays and taking risks.”

The European Union today agreed to reopen its borders to 15 countries excluding the virus-stricken US, as the pandemic accelerated globally with more than 505,000 deaths worldwide.

As Ireland is not in the Schengen Area it is exempt from the recommendation and can decide for itself which citizens to let in.

The ITAA said that are currently 250,000 jobs at risk in the tourism sector as the industry relies on overseas tourism for 70% of its revenue.

Speaking in the Dáil for the first time as Minister for Health this afternoon, Fianna Fáil’s Stephen Donnelly said a debate is currently ongoing in government about whether legislation is needed to make quarantine for 14 days mandatory for people arriving in Ireland.

Shortall asked the minister today if legally-based supervised quarantine is introduced, would legislation be required. She also asked if the new government would introduce such a measure.

Donnelly told the Dáil there is the debate is ongoing “in relation to that question right now”.

There had been concerns among some in the last Cabinet that making it mandatory for Irish citizens or visitors coming into the country to self-isolate would be a “step too far”.

The Chief Medical Officer has recommended designated facilities might be used for the 14-day period. Ministers of the last government were of the view that it was something that if given the green light could have caused a major split around the Cabinet table.

In what was seen as u-turn on the issue, the former Health Minister Simon Harris this month that “at the moment, I am satisfied with where we are” with the guidance on the 14-day quarantine period.

The government has put the passenger locator form on a statutory footing, meaning that at ports and airports it is now an offence for someone to refuse to give their name and address of where they are staying. Gardaí can do “spot-checks” as a result, said Harris, stating he was satisfied that is enough for now.

The Irish Council for Civil Liberties (ICCL) has previously raised serious concerns with the Dáil Covid-19 Committee in relation to extra powers and laws relating to mandatory isolation. 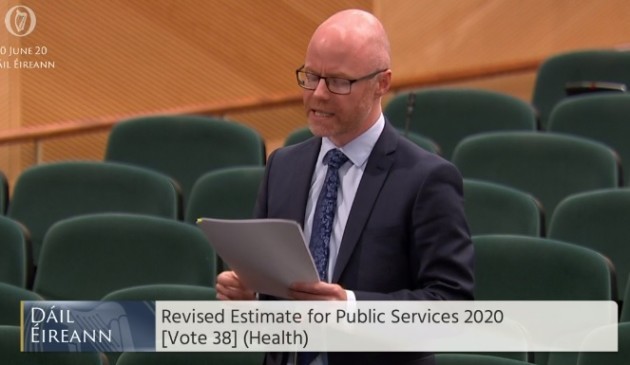 It is, of course, very important that we reopen society and our economy but we cannot do so at the risk of another wave of infection around the country. I ask people to follow the advice of the experts, who have guided us very well so far.

Donnelly said he is “deeply conscious of the impact of Covid-19 on the people living in our country”.

“We have seen our safe, well-ordered worlds of routine turned upside down. We have lost beloved friends, family members and neighbours and have been unable to mourn them as we want to. We have asked more and more of the people working on the front lines and behind the scenes in our health service.

“We have asked them to work relentlessly in the face of what must have seemed like endless days and nights. I thank every one of them from the bottom of my heart for all they have done,” he added.

– With reporting from Adam Daly