Three people have died in the latest blaze. 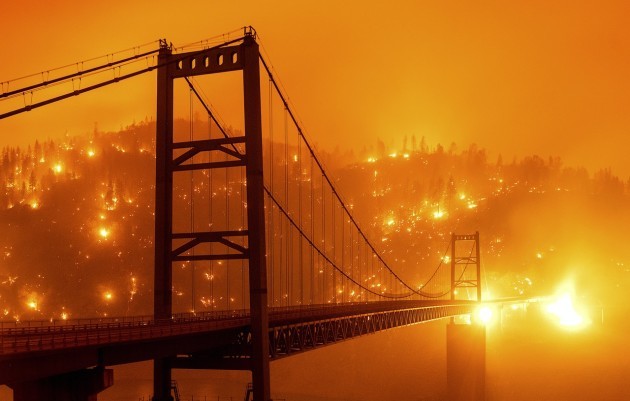 Embers light up a hillside behind the Bidwell Bar Bridge in Oroville, California.

THREE PEOPLE HAVE died in a California wildfire which has forced thousands of people to flee their homes and turned the sky orange.

One of the victims was found in a car apparently attempting to flee the fires, California Highway Patrol Officer Ben Draper told reporters.

Hundreds, if not thousands, of homes and other buildings are believed to have been damaged or destroyed by the blaze northeast of San Francisco, fire officials said.

The fire has also threatened Paradise, a town devastated just two years ago by the deadliest blaze in state history that prompted a traffic jam as panicked residents tried to escape.

People really don’t know what to do right now. Everyone on the Embarcadero is stopping to record the sky and chit chatting in a way I haven’t seen since pre-pandemic @sfchronicle pic.twitter.com/ueKQ4g7WTD

It’s 12 p.m. in #SanFrancisco and here’s what my neighborhood looks like right now. @sfchronicle pic.twitter.com/XhBg2b4kpG

Other wildfires charred huge swathes of the west of the US amid gusty, dry conditions, with Washington, Oregon and Idaho also impacted.

A blast of polar air helped slow wildfires in Colorado and Montana.

Since the middle of August, fires in California have killed 11 people, destroyed more than 3,600 structures, burned old growth redwoods, charred shrubland and forced evacuations in communities near the coast, in wine country and along the Sierra Nevada.

Thick smoke choked much of the state and cast an eerie orange hue across the sky yesterday as thousands of people in communities near Oroville were ordered to evacuate. 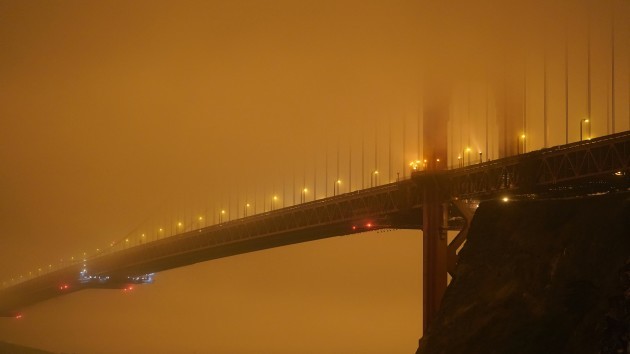 The Golden Gate Bridge in San Francisco is barely visible through smoke from wildfire.

Daniel Swain, a climate scientist at the University of California, Los Angeles, conservatively estimated the fire had burned about 400 square miles in 24 hours.

“The unbelievable rates of spread now being observed on these fires — it is historically unprecedented,” he tweeted.

The US Forest Service, which had taken the unprecedented measure of closing eight national forests in Southern California earlier in the week, ordered all 18 of its forests in the state closed Wednesday for public safety.

In Paradise, where 85 people lost their lives and nearly 19,000 buildings were destroyed, the sky turned from black to cherry red and ash carried on strong winds rained down in a scene reminiscent of the fateful morning of 8 November 2018, former Mayor Steve ‘Woody’ Culleton said.

“It was extremely frightening and ugly,” Culleton said.

“Everybody has PTSD and what not, so it triggered everybody and caused terror and panic.” 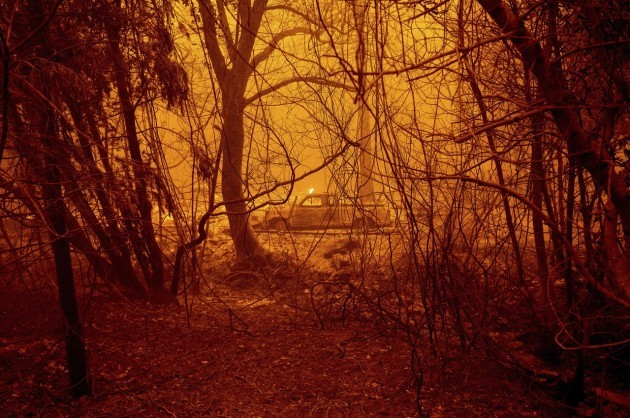 A scorched car rests in a clearing following the Bear Fire.

People in foothill communities east of Los Angeles were warned to be ready to flee, but the region’s notorious Santa Ana winds were weaker than predicted.

“We’re encouraged that the wind activity appears to be dying down,” Governor Gavin Newsom said. “The rest of the week looks a little more favorable.”

California has set a record with nearly 2.5 million acres burned already this year, and historically the worst of the wildfire season does not begin until the autumn.