The Dáil is not set to return until mid-September. 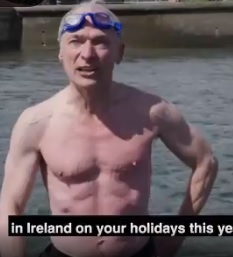 POLITICIANS ARE OFF on their six-week summer holidays today, with the Dáil not set to return until mid-September.

While Fine Gael TD Richard Bruton is going some lengths to encourage people to holiday at home this year (he’s suggesting taking a dip in his own constituency) the timing of the ‘summer holidays’ in the middle of a pandemic is likely to raise eyebrows and some criticisms from members of the public.

🐟 🚲 🏊‍♂️ @RichardBrutonTD shows you his top activities in Howth and the surrounding areas for your #Staycation2020.

From October, you can avail of our new scheme on your food and accommodation costs.

The Fianna Fáil, Fine Gael and Green Party government has gotten off to a bumpy start, but ministers are expected to use the time in August to bed into their new briefs.

The Dáil usually rises for the summer a little earlier, but it was earmarked some time ago that the 33rd Dáil would sit for most of July in order to continue dealing with the public health emergency, as well as producing the government’s jobs stimulus plan.

The cutting short of the summer break was first floated in May by former Taoiseach, now Tánaiste, Leo Varadkar.

“I think everyone in the country is going to want to take their annual leave at some point, including politicians, notwithstanding the very strange political scenario we have seen for the last four months.

“I can guarantee you that TDs and senators from government and opposition have been working very hard,” he said.

While TDs and senators are off on their break from today, the Cabinet is due to meet next week to discuss whether it can sign off on Phase 4 of reopening the economy on 10 August.

It is believed ministers will then pause for a number of weeks, with no more Cabinet meetings scheduled as of yet, until their return in September.

The exact date for the return is understood to be the 15 September.

There is a bit more business to get done by the end of the week. A number of Cabinet sub-committee meetings are due to be held on housing, climate action and social policy, while the North-South Ministerial Council is also taking place tomorrow in Dublin Castle.