THE PSNI HAS said that it is reviewing footage taken at the funeral of senior republican Bobby Storey in Belfast today and will consider any suspected breaches of Northern Ireland’s coronavirus legislation.

It comes after the North’s health minister – unionist Robin Swann – said the large number of attendees at the funeral today was a clear breach of Stormont restrictions limiting public gatherings to 30 people during the Covid-19 pandemic restrictions. 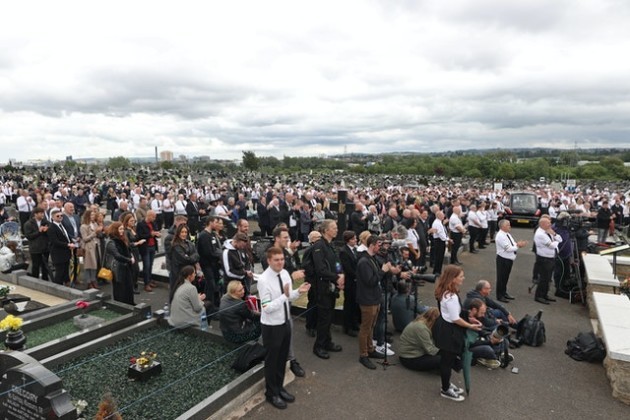 O’Neill in particular has faced strong criticism from political rivals in Northern Ireland, given her role as the joint head of a Stormont Executive that has been instructing people to limit the size of funerals during the lockdown.

Amid criticism from politicians, police in the North said they would review the events today.

PSNI Superintendent Melanie Jones said: “We were made aware of the plans for today’s funeral and have engaged with the celebrant and service organisers to highlight both the public health advice and risks around Covid-19, and the requirement for those attending to adhere to social distancing.

“We had assurances that those attending would observe the health guidelines and that marshals would be in place to encourage those lining the cortege route to observe social distancing.

“We will now review footage gathered during the funeral and will consider any suspected breaches of the Health Protection (Coronavirus Restrictions) Regulations NI 2020.”

Following the events today, Traditional Unionist Voice leader Jim Allister insisted Ms O’Neill’s position was no longer tenable, while DUP MLA Jonathan Buckley raised a point of order in the Assembly questioning whether she had broken the members’ code of conduct.

Swann’s weekly Covid-19 media conference was later dominated by the issue, with the health minister challenged on whether the executive’s credibility had been undermined.

He was asked if the incident could lead the public to question the point of abiding by the rules – the way some people did after the Prime Minister’s top adviser Cummings was accused of breaching regulations during a trip to the north west of England during lockdown.

“I’m concerned with what I saw this morning in west Belfast,” he said.

He added: “I sincerely hope that this isn’t the Dominic Cummings effect in Northern Ireland because in our health service we can’t afford it to be.

“We are in a position in Northern Ireland where we had zero deaths today, with zero people in our intensive care units because of the actions of the people of Northern Ireland.

“So I have a very clear ask – please don’t let this weaken your resolve or your ability to follow the guidance that have gotten us to the position where we are today.”

Swann urged people to continue to comply with the guidance, making clear that “two wrongs don’t make a right”. 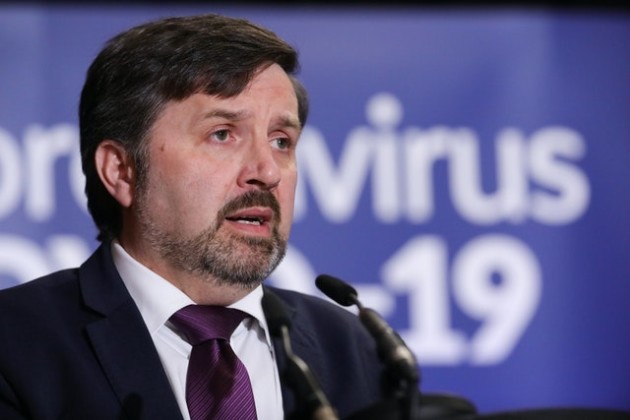 “There’s no person, no position or there’s no point of privilege that is above the guidance and the regulations that we have laid down in how we combat Covid-19 in Northern Ireland,” he said.

“Because there’s no one immune from it and that is the guidance we still have to keep reiterating, and I do hope that what we saw today does not undermine the public message that has worked so well in Northern Ireland, that has actually got us to the position where we are today.”

Swann used the west Belfast incident to warn that regional lockdowns could be introduced in Northern Ireland if an upsurge in the virus, similar to that witnessed in Leicester, was to occur locally.

He said numbers in the cortege that followed the coffin were limited to 30 and that only a small number of people attended the church service. He said Sinn Fein had also live streamed the event in an effort to encourage people to watch it online.

“This clearly is a very, very popular figure within republicanism, it was clearly going to be a very significant funeral and all efforts were made to try to manage that in line with the guidance,” he told UTV.