The reigning champions could make a few changes for the Pro14 final against Ulster.

LEINSTER ARE SET to hand Ross Byrne the number 10 shirt for the Guinness Pro14 final against Ulster at the Aviva Stadium on Saturday.

25-year-old Byrne has been excellent across the course of the 2019/20 campaign and is in line to see his performances rewarded with a start in the Pro14 decider this weekend, with captain Johnny Sexton moving to the bench. 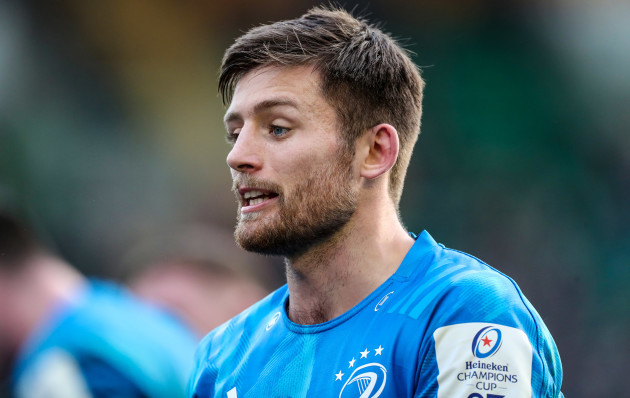 Ross Byrne is set to that the Pro14 final for Leinster.

Leo Cullen and Stuart Lancaster could field a new halfback partnership, with Jamison Gibson-Park’s good form set to see him start ahead of Luke McGrath.

The reigning Pro14 champions have been weighing up changes this week as they look to acknowledge good form during the 2019/20 regular season.

While it is expected that Cullen and Lancaster will opt for a fairly settled team, there could also be a return to the starting XV for openside flanker Josh van der Flier after two strong performances from Will Connors in that position over the past fortnight.

Fullback Jordan Larmour took a blow to the head against Munster last weekend and is currently going through the return-to-play protocols. If Larmour isn’t fit, Leinster could move Hugo Keenan to fullback and bring Rory O’Loughlin onto the wing, but they remain hopeful Larmour will be cleared to play.

Meanwhile, James Ryan’s return to full fitness means he could come straight back into the starting XV for Leinster in what would be a major boost for the eastern province ahead of Saturday’s final.

The 24-year-old suffered a shoulder injury during pre-season training over the summer but has made a full recovery and is now in line to make his return against Ulster.

Leinster and Ulster are due to name their match day 23s at midday on Friday.