The S-400 ‘Triumf’ air defense system is taking the globe by storm. After NATO member Turkey, India is next in line and even Iraq is reportedly interested, despite US threats of sanctioning anyone who buys weapons from Moscow. 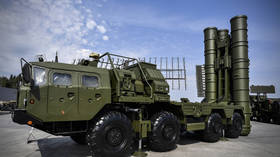 At the Lucknow DefExpo 2020 last week, Russian officials confirmed that India will receive its first shipment of S-400s by September 2021. The $5 billion deal signed in 2018 will be moving ahead despite US warnings that such a purchase could trigger sanctions under the CAATSA (Countering America’s Adversaries Through Sanctions Act), which President Donald Trump signed in August 2017 as part of a wider program aimed against Russia.

Race for the ‘Triumf’

The versatile missile system has been around since 2007, but in recent years emerged as a must-have for any nation with serious military aspirations – and not just traditional buyers of Russian arms. The S-400 is winning out over several other options, including the US Patriot and THAAD systems, which has not made Washington happy.

Saudi Arabia and Iraq are the latest countries which have taken keen interest in the ‘Triumf.’ Riyadh was offered the S-400 following the September 2019 drone attack on the kingdom’s oil fields – apparently carried out by the Houthis from Yemen, although the Saudis have blamed Iran. The strikes revealed the limits of Saudi Arabia’s seemingly sophisticated air-defense systems, based around the US-made Patriot surface-to-air missiles and associated radars.

Clearly, the Patriots didn’t stop the drone attack. Nor was that the first time that Saudi Patriots failed. In March 2018, at least five Patriots apparently missed, misfired or were not operated correctly, when Saudi forces tried to intercept a barrage of rockets targeting Riyadh. However, in deference to US interests, Saudi Arabia is yet to sign a contract with Russia. Instead, Washington has deployed troops and additional air defense systems in the region.

Iraq is reportedly also considering the purchase of S-400s, but is yet to formally begin consultations with Russia.

“There have been no appeals from the Iraqi side about the purchase of Russian S-400 air defense systems, but there is interest in them,” said Russian ambassador to Iraq, Maxim Maximov. “We always say that we are ready to continue to assist the Iraqi government in strengthening the country’s defense capabilities.”

Turkey, though a NATO ally, received its first S-400s last summer, and is expected to have the systems online sometime this year. Washington reacted strongly, blocking Ankara from purchasing US F-35 fighter jets for which it has contracted.

China is in the middle of receiving its final shipment of the S-400s. Evidently, the increasing US activity in the South China Sea – involving advanced aircraft such as the F-35 and F-22 – may have compelled Beijing to buy the S-400, tacitly acknowledging that its own home-grown air defense system was inadequate to counter the modern US air power.

Interestingly, Washington has not sanctioned Beijing over the S-400 purchase, though it had imposed sanctions earlier for buying fighter jets and missiles from Russia.

Nor have sanctions been implemented against India, despite numerous threats to do so by the US. This might be in part because New Delhi has sought to placate Washington by considering the purchase of American NASAMS II (National Advanced Surface-to-Air Missile System) for protection of the national capital region against ballistic missiles. Furthermore, India is in advanced stages of negotiating a $3.6 billion helicopter deal with the US, which could reportedly be signed during President Trump’s visit later this month.

It is also worth noting that India plans to deploy its S-400s along its northeastern border, facing China.

The S-400 has a good pedigree, coming from the family of S-200 and S-300 air defense missile systems. It made its debut on the world stage in 2007, when it was first put into service of the Russian armed forces.

However, it has yet to be tested in battle, unlike the US Patriot Pac-2, manufactured by Raytheon, and Lockheed Martin’s THAAD. So what is making countries across the globe opt for the Russian system instead? Apparently, a combination of costs, political baggage, and versatility.

The ‘Triumf’ is much cheaper than American offerings, coming in at about $500 million compared to the $1 billion for the Patriot Pac-2 or the $3 billion for a THAAD battery. Russian weapons systems are generally less expensive than most Western counterparts, in part because US contracts all come with extensive – and expensive – maintenance deals tacked on.

Another reason why many nations prefer the S-400 is that buying weapons from the US government involves cumbersome processes and time-consuming regulatory hurdles.

Last, but not least, the S-400 offers more bang for the buck. The THAAD is a formidable missile defense system, whose reported capabilities against ballistic missiles surpass any rival – but it can only shoot down missiles, and only at very high altitudes (40-50 km minimum). For intercepting fighter jets, long-range strategic aircraft or drones, one would need to use the Patriot – which has a sketchy track record in that regard. In comparison, the S-400 can unite the functions of both systems, which makes it far more cost-effective.

All of this adds up to clear evidence that the S-400 is “triumphing” over other air defense systems globally.