Level One will mean the least severe of the restrictions with Level Five the most serious.

THE GOVERNMENT HAS announced its five-level plan for ‘Living with Covid-19′ over the next six months.

The plan, which has been well-flagged in advance, was confirmed by Taoiseach Micheál Martin at a briefing at Dublin Castle this morning.

The plan sets out five different levels of restrictions that can be in place in different counties depending on the levels of Covid-19 in each area.

Level 1 will mean the least severe of the restrictions with Level 5 the most serious.

Martin said the plan is about ”protecting health, strengthening employment and supporting communities”.

Martin said: “We are not yet able to make Covid-19 a part of our past. But we have a lot more clarity about how we can get to that point.

Today I want to talk with you about the direction of our country over the next six months. This is not just about how we will live with the Covid-19 virus but also how we will work towards a new social, economic, and cultural life.

Martin said that he understands there has been “frustration from people in businesses in particular” but that, until there is a vaccine, “we must continue to live with the reality that Covid-19 is potentially deadly and causes long term illness”.

The Taoiseach said that every county in the country is currently at Level Two.

This means that a range of restrictions are in place, including restrictions on social and family gatherings.

This is different in Dublin which is facing “additional measures”. In the capital the six-person limit is also in place but visitors can be from just one other household only.

Dubliners are also encouraged to limit travel outside the region.

At a national level, under Level 2, bars, cafes and restaurants may remain open as under the current restrictions and ‘wet pubs’ may reopen around the country from next week. 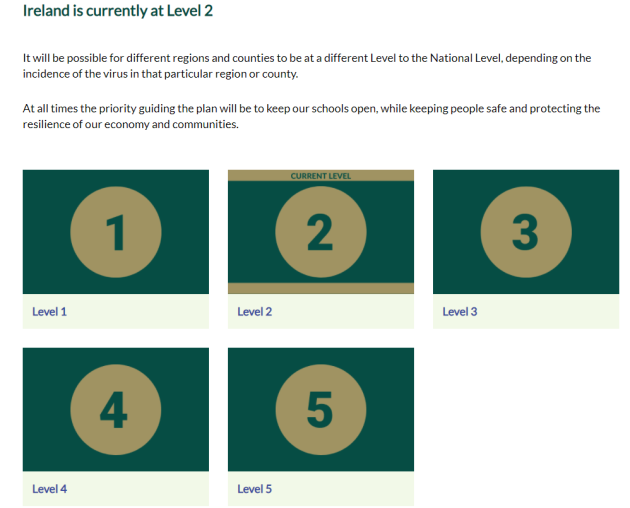 However, Tánaiste Leo Varadkar said at the briefing that pubs in Dublin that do not serve food would remain closed for now. Nightclubs, discos and casinos must also remain closed across the country.

People are being advised to work from home where possible across the country. The plan explains:

If you can work from home, you are advised to only attend work for essential on-site meetings, inductions and training.

Up to 50 people can attend weddings and the same restriction applies to funerals.

For other indoor gatherings, such as events in theatres or cinemas, up to 50 patrons are permitted and in pods or groups of up to 6 people.

Up to 100 patrons are permitted for larger venues where strict two-metre seated social distancing is maintained.

On the issue of international travel, the Taoiseach said that the government will broadly support the European Commission approach on travel going forward.

When adopted, the Europe-wide system will mean a significantly different approach to the current guidelines on air travel in and out of Ireland.

The EU’s system would see zones classified as green, amber or red, with travellers returning from green countries not required to quarantine. Ryanair has been among those lobbying for Ireland to immediately adopt the European Commission’s approach.

In late July, the government agreed a so-called Green List where people could travel to and from without the advice to restrict their movements for 14 days afterwards.

The government was criticised for its messaging on the Green List, and this was encapsulated by a remark from the Tánaiste that “it may not be simple, but it is straightforward”.

Until the new EU system is in place, the government will amend the Green List from Monday to include countries with an incidence rate of less than 25 cases per 100,000 in the past fortnight. This should include countries like Germany.

Health Minister Stephen Donnelly confirmed to RTÉ’s News At One that the Green List would be expanded to include other countries this Monday.

Today’s announcement was made following a Cabinet meeting this morning that signed-off on some of the final decisions.

“This is a plan which gives clarity of each of our responsibilities. It includes concrete measures and shows how we can limit impact of the virus while keeping schools open and protecting and expanding employment,” the Taoiseach said.

“The plan is broad and comprehensive. Protecting public health remains an absolute priority.”