Sean Roughan is making a big impression at Lincoln City.

IN FEBRUARY OF last year, Lincoln City Football Club began searching for what they feared would be a needle in a haystack.

“The Lincoln City Academy is looking to recruit a part-time personal tutor,” read an article published on the website of the club, who were in the process of achieving promotion from League Two. “The purpose of this is to teach a scholar the Irish language as part of his Leaving Certificate.” 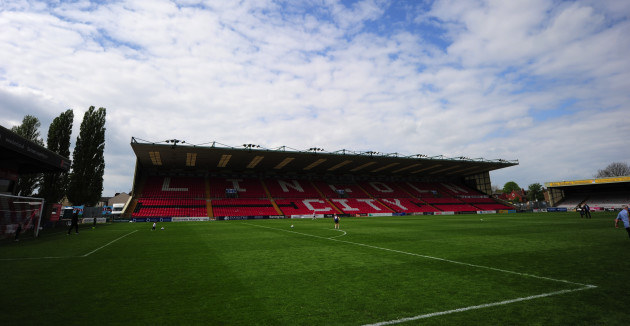 Attempting to source a Gaeilgeoir in England’s East Midlands was a considerable length to go to for a club of Lincoln’s relatively modest stature. It was also indicative of how highly they’ve regarded Sean Roughan since he was first scouted while playing for Phoenix FC against Crumlin United.

Roughan’s mother had no intention of stifling her son’s desire to become a professional footballer. However, she was aware of the many tales of young Irish players who returned from England without a back-up plan after being discarded by a ruthless and competitive industry.

At her insistence, Lincoln agreed to allow Roughan juggle football and education. He joined the club last summer on scholarship terms and studied nearby at the Lincoln Minster private school, which catered for all but one of his Leaving Cert subjects.

Eventually, the pursuit of an Irish teacher was aided by the decision of another sportsman from these shores to take his career across the Irish Sea.

Former Munster assistant coach Ian Costello, who’s now on the staff at Premiership Rugby club Wasps, relocated to England with his family in 2016. Employing his wife, Louise, a qualified teacher, allowed Lincoln to complete the signing of a player for whom their hopes are high.

When he wasn’t trying to get his head around the modh coinníollach, Roughan’s performances for the youth team justified the faith shown in him by Lincoln.

He earned a first Republic of Ireland U17 cap against Switzerland in February. In July, he was rewarded with a professional contract by his club, who had finished 16th in their first season back in League One for over two decades. 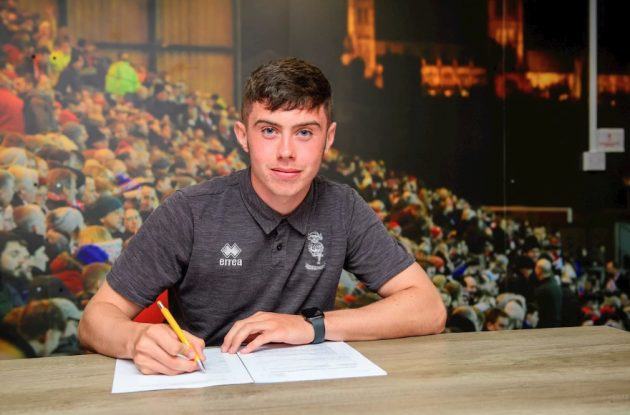 “Sean made great progress throughout last season and we feel that he is a player of real potential, hence offering him a professional contract at the earliest possible opportunity,” Jez George, the club’s Head of Football, said at the time. “We are absolutely delighted that he has trusted us with his continued development and committed his future to Lincoln City.”

Upon signing the deal, Roughan set a target of making a first-team appearance within 12 months. The new season only kicked off 19 days ago, yet he has already made three.

The debut came on the week of his 17th birthday, with the young Dubliner playing all 90 minutes at left-back in a Carabao Cup win over Crewe Alexandra. Two days later, he received six honours when the Leaving Cert results arrived.

“As a very young lad he was a brilliant left-winger,” says Longford Town manager Daire Doyle, who coached Roughan at Swords Celtic and Phoenix.

“He always had great natural ability and a wand of a left peg. It probably wasn’t until he was about 15, as he started to grow bigger and taller, that you would have seen real potential in him as a left-sided centre-back. He’s gone on to do fantastically well since then.

“He has already got an education and some first-team experience behind him now, which is a really good position to be in at that age. Hopefully he can continue to show people just how good he is, because he’s had a really good start to his career.”

When Lincoln began their League One campaign, Roughan retained his place for a 2-0 home win over last season’s play-off finalists Oxford United. Last Saturday, he was in from the start again in a 2-1 victory at MK Dons. 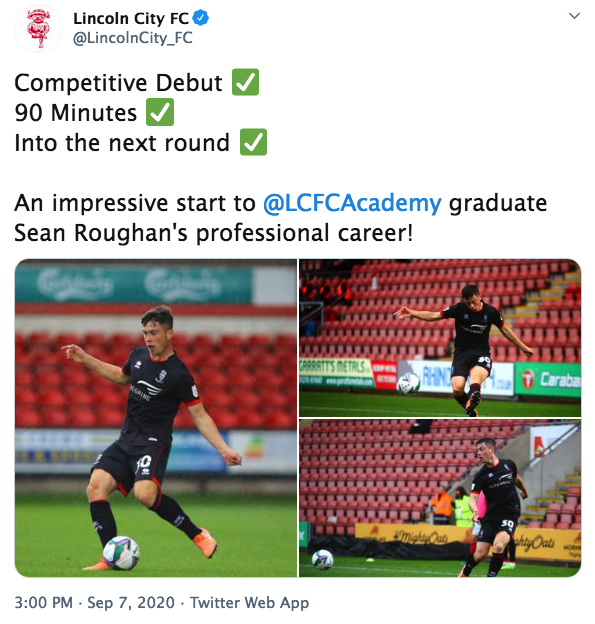 “I can talk about what he does in and out of possession, but the biggest thing is his mentality,” Lincoln City manager Michael Appleton said of Roughan after the Oxford game.

“He’s got an incredible mentality for a 17-year-old. When he makes a mistake, he’s got the mental strength to get it out of his mind quickly and move forward.

“There are going to be times this season when he’s going to need a rest and I’ll need to pull him out of there… For a lad who’s only just turned 17, against a good side like Oxford, it was very, very good.”

If he’s selected, Roughan – along with compatriots Anthony Scully and Zack Elbouzedi – will be in the Sky Sports spotlight for tonight’s live broadcast of Lincoln’s Carabao Cup third-round tie against Premier League champions Liverpool (7.45pm kick-off).

Jurgen Klopp is unlikely to travel to Sincil Bank with many of the players who brought a league title to Anfield for the first time in 30 years. Nevertheless, Lincoln will face a formidable challenge in their bid to advance to a meeting with Arsenal.

The experience is sure to teach Roughan a few lessons, but he’s not one to shy away from an opportunity to further his education.