Gardaí are investigating a number of the incidents since lockdown began.

GARDAÍ ACROSS THE country are battling a potential increase in dog thefts during lockdown with experts saying that the Covid crisis has brought with it “an unprecedented increase in the demand for dogs”.

While charities such as the DSPCA and rehoming centres like Dogs Trust say they have been told about a significant number of dogs reported missing and potentially stolen, gardaí have urged people to report a potential crime to them so they can ascertain the scale of the problem.

There is anecdotal evidence of thefts having increased but the official reported number has not, which officers say shows a lack of reporting by people who believe their pet has been stolen.

Nonetheless, gardaí have launched a crackdown on dognapping in recent weeks with many seizures of animals being made.

In a statement, gardaí said they are “aware there has been a number of dog thefts throughout the country recently”.

“However, the number of incidents reported to Gardaí do not reflect a significant increase in dog theft. If your dog has been stolen, report the matter to your local Garda Station as soon as possible.”

Corina Fitzsimons of Dogs Trust Ireland said her organisation has been made aware of an increase in thefts and singled out that there has been a large demand for thoroughbred dogs.

“Sadly, we have seen a big increase in the number of dogs missing, suspected as stolen on our Lost and Found Dogs Facebook Group so, we would urge dog owners to be very careful with their dogs and not to leave them in their gardens unsupervised, leave them outside shops or let them out of their sight while out walking.

“We would also ask people to ensure their dogs are microchipped and most importantly, that their most up to date contact details are recorded against the microchip and if in any doubt to contact their microchip database provider.

“Judging from the posts in our Lost and Found Group, it appears that pedigree dogs are being reported more frequently as being stolen but that doesn’t mean crossbreed dogs are not at risk too.”

Fitzsimons explained that lockdown in Ireland brought about an unprecedented demand for dogs that nobody could have foreseen. She said there is a risk that the average consumer could unwittingly purchase a dog who has been stolen.

“This is why it is imperative that you see the dog’s microchipping certificate before buying a dog. We recommend to anybody thinking of getting a dog or puppy to visit here for advice and if you have your heart set on a buying a puppy, to visit PetBond.ie where breeders have been checked and verified by a team of vets,” she added.

She noted that Dogs Trust already had a number of puppies surrendered to it who were purchased online in haste.

“The last thing we want to see are puppies being sold on again when things don’t work out, so please, if you are struggling with your dog or puppy, please contact us for advice, we are here to help,” she said. 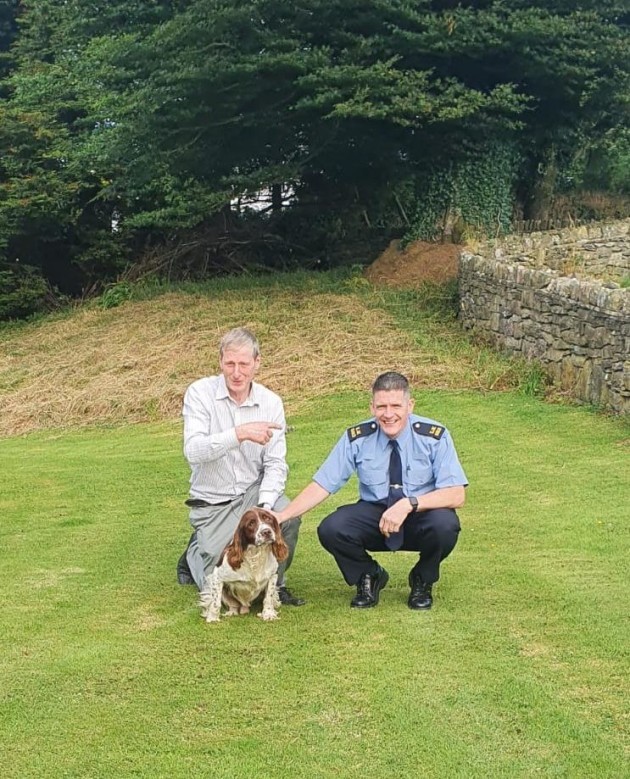 A happy tail: Garda Shane Hayes, Gerard and his dog Jake, who was stolen but later returned unharmed.

Gardaí believe most of the dog thefts have been opportunistic with many “totally unplanned”, according to those familiar with the investigations.

While there is evidence to suggest certain homes were targeted prior to the animal being stolen, it is not the case that this is a wide-scale occurrence, the source added.

Many people have shared stories online about homes being targeted and how small signals were being used to signify that a thoroughbred dog was in the garden of a certain house. Many people have, for example, reported seeing chalk patterns outside the homes of a burglary victim.

While signals such as these have been used in the past to mark out high-value homes worth thieving from, it is “highly unlikely” that something similar is happening in relation to dognapping, the source added.

The DSPCA also poured cold water on this concept. Spokeswoman Gillian Bird said that there is not an “epidemic” of dog thefts but rather a combination of a number of reasons, including the easing of lockdown measures. Bird explained how it is “vitally important” that dog owners report their animal missing to their local dog warden.

“People are nervous that they’re terrified that the wardens will torture and kill it which is a load of rubbish,” she said.

Bird also said that it would be rare that stolen dogs are taken for immediate resale. However, she warned any prospective thieves looking to take animals for breeding purposes that the whole process is lengthy and requires expertise which many do not possess.

“We’ve been in lockdown since March, and only in the last month we have seen people now going back to work, to the shops, dogs being left in the back garden, dogs being brought to the shops. There is a greater chance for these animals to go missing now compared to when we were all stuck in our homes,” she said.

Gardaí are continuing to investigate several incidents of suspected dog theft and have urged anyone who believes they have been a victim of this crime to come forward so An Garda Síochána can assist them.

Speaking about the recent increase in thefts, a garda spokesman said:

“An Garda Síochána is aware there has been a number of dog thefts throughout the country recently. As we are hearing a lot about dog theft, it can make dog owners feel unsafe and worried about their beloved pets – so we would advise you take extra precautions for their safety.

Gardaí also urged the public to be wary of strangers and vary their walking patterns.

“You might be more than happy to talk about your dog to anyone who asks but be aware and stay vigilant of strangers on your dog walks. Be wary of anyone that starts asking for personal information, if you notice a stranger watching you or your dog, or if you see someone acting suspiciously. Make sure to vary the times and places you walk your dog to avoid creating a pattern for thieves to track and plan around,” the spokesman added.