Barrett, of Indiana, was at the White House at least twice this week.

REPUBLICANS ARE EXPECTING US President Donald Trump to announce today that he is nominating Judge Amy Coney Barrett to the Supreme Court.

Conservative groups and congressional allies are laying the groundwork for a swift confirmation process for Barrett, even before Trump makes the selection official in a Rose Garden ceremony this evening.

They, like the president, are wasting little time moving to replace the late Justice Ruth Bader Ginsburg, organising multimillion-dollar ad campaigns and marshalling supporters to confirm the pick.

For days, White House officials have indicated to congressional Republicans and outside allies that Barrett is Trump’s pick, but aides have offered no official word as they try to maintain some suspense before the official announcement.

The likely shift in the court’s make-up — from Ginsburg, a liberal icon, to an outspoken conservative — would be the sharpest ideological swing since Clarence Thomas replaced Justice Thurgood Marshall nearly three decades ago.

For Trump, it will provide a much-needed political assist as he tries to fire up his base.

For conservatives, it will mark a long-sought pay-off for their at-times uncomfortable embrace of Trump.

And for Democrats, it will be another moment of reckoning, with their party locked in a bitter battle to retake the White House and the Senate. 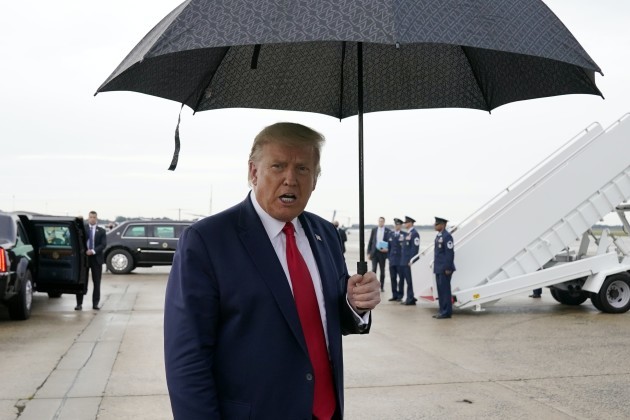 President Donald Trump is set to nominate a conservative judge

Senate Republicans are readying for confirmation hearings in two weeks, with a vote in the full chamber now expected before Election Day. Democrats are essentially powerless to block the votes.

“I’m confident he’s going to make an outstanding nomination,” Senate Majority Leader Mitch McConnell told Fox News. “The American people are going to take a look at this nominee and conclude, as we are likely to conclude, that she well deserves to be confirmed to the US Supreme Court.”

“They’re hell-bent on getting this done as fast as possible,” said Democratic Senate whip Dick Durbin. “They think it helps Donald Trump get re-elected.”

Outside conservative groups, who have been preparing for this moment for 40 years, are planning to spend more than $25 million to support Trump and his nominee.

Within hours of Ginsburg’s death, Trump made clear his intention to nominate a woman in her place, after previously putting two men on the court and as he struggles to mitigate an erosion in support among suburban women.

The White House has already concluded a round of vetting this month, as Trump released an additional 20 names he would consider for the court. He has challenged Democrat Joe Biden to list possible nominees too.

Trump had said he was considering five women for Ginsburg’s seat, including Florida’s Barbara Lagoa and Michigan’s Joan Larsen.

Barrett, of Indiana, was at the White House at least twice this week, including for a Monday meeting with Trump. He is not known to have met with any of the other contenders.