The Financial Times claims Sir Jonathan has resigned due to a dispute with Downing Street.

THE HEAD OF the UK Government Legal Department has resigned amid anger over suggestions Boris Johnson is planning to override elements of the Brexit Withdrawal Agreement.

Sir Jonathan Jones’s departure was confirmed by the Attorney General’s Office, which declined to comment on the reason for the latest exit in a string of resignations of top civil servants.

It comes as Northern Ireland Secretary of State Brandon Lewis this afternoon told the House of Commons “this does break international law in a very specific and limited way”.

“We are taking the power to disapply the EU law concept of direct effect required by Article 4 in a very certain and tightly defined circumstances,” he said.

“Yes, this does break international law in a very specific and limited way”. pic.twitter.com/6B8pU5M2cH

The Financial Times reported today that Jones was quitting as the department’s permanent secretary due to a dispute with Downing Street.

Two Whitehall officials were said to have told the paper that he was departing over concerns the Prime Minister wanted to row back on parts of the Brexit deal relating to Northern Ireland.

A spokesman for the Attorney General’s Office said: “I can confirm Sir Jonathan has resigned but cannot comment further.”

Also quitting as Treasury solicitor, his is the sixth resignation of a senior civil servant this year amid growing tensions between officials and Downing Street as Johnson and his top aide, Dominic Cummings, plan an overhaul of Whitehall. 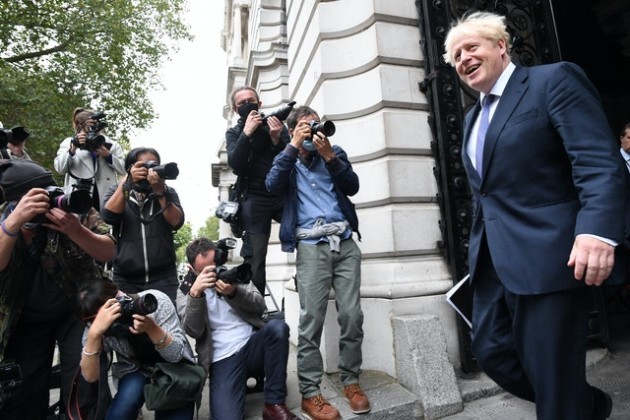 “If he can’t stay in the public service, there must be something very rotten about this Government. Reckless, law breaking, trashing the best of the UK.”

The resignation came as the eighth round of trade deal negotiations between the UK and the EU were to get under way in London on Tuesday.

Senior EU figures were dismayed by suggestions new Brexit legislation to be introduced on Wednesday could override key elements of the Withdrawal Agreement brokered by Johnson last year.

Johnson’s official spokesman insisted the “limited clarifications” were necessary to ensure the gains from the Good Friday Agreement can be preserved in the event talks fail.

But European Commission President Ursula von der Leyen warned there could be no backtracking by the UK on its previous commitments if it wanted to reach a free trade agreement.

Minister for Foreign Affairs and Trade Simon Coveney warned that abandoning the agreement would be “a very unwise way to proceed”.

Sir Jonathan, a barrister and Queen’s Counsel, became the head of the Government Legal Department in 2014, having previously served as legal adviser to the Department for Education (DfE) and director general of the Attorney General’s Office.

His departure follows the resignation of Sir Mark Sedwill as Cabinet Secretary and of permanent secretaries Jonathan Slater, from the DfE, Sir Simon McDonald, from the Foreign Office, Sir Richard Heaton, from the Ministry of Justice, and Sir Philip Rutnam from the Home Office.

Cummings has reportedly told aides a “hard rain is coming” for the Civil Service amid plans to reshape Whitehall.