After heavy-handed police action harassed a former officer over tweets merely expressing an opinion within the transgender debate, the UK High Court has ruled against the police – a rare win for free speech in the UK. 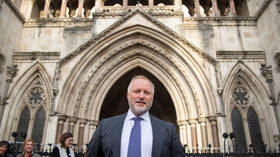 Harry Miller is not a criminal. He used to be a police officer himself. So when Humberside Police in the north of England contacted the directors of his company, and logged a ‘hate incident’ over his allegedly “transphobic tweets,” he fought back.

Miller, 54, was threatened with prosecution by Humberside Police in northern England if he continued to tweet, and police officers visited him at his place of work in January last year. You’d expect that kind of police action – something which could affect someone’s job and livelihood – to happen only when it comes to serious criminal offences. Yet of the many, many people who had seen his tweets the police actions were based upon just one person’s complaint.

He received a ‘crime report’ showing the category as non-crime. According to the police’s Hate Crime Operational Guidelines, a hate incident should be recorded “irrespective of whether there is any evidence to identify the hate element.” The very notion of a ‘hate incident’ without any actual hatred and a ‘non-crime crime’ would seem laughable if these weren’t forming part of how policing in the United Kingdom has gone so badly astray. If the whole thing sounds absurdly Orwellian, it’s refreshing that even the High Court thought the treatment of Harry Miller was ridiculous.

In his ruling today, Mr. Justice Julian Knowles said “The effect of the police turning up at [Harry Miller’s] place of work because of his political opinions must not be underestimated. To do so would be to undervalue a cardinal democratic freedom. In this country we have never had a Cheka, a Gestapo or a Stasi. We have never lived in an Orwellian society.”

How many times, I wonder, have people in Harry Miller’s situation simply rolled over and accepted heavy-handed police treatment over similar comments that were simply free speech? How can we trust the official hate crime statistics when we don’t know how many ‘hate incidents’ didn’t contain any hatred, which you’d think would be a key component?

Harry Miller had the vision and determination to take Humberside Police to court. His opinion – that biological sex cannot be changed, but that he doesn’t want to interfere with anyone else’s rights to do whatever they want – is hardly one of the most controversial things you’ll ever hear said on the internet.

He made his points with a mixture of wit, sarcasm and irony without ever targeting any individuals. The heavy-handed police action, which included threats that he could be prosecuted if he continued to speak out in the same way, made a mockery of what policing is supposed to be. We have plenty of actual crimes in the United Kingdom which the police are failing to solve; diverting resources to something which was not: the judge even commented that there wasn’t the ‘slightest risk’ that Mr. Miller would commit a criminal offence by continuing to tweet.

There was no crime here. There was never any prospect of there being a crime here. The court was absolutely correct to describe the potential ‘chilling effect’ of the police’s actions. Today was a rare victory for freedom of speech over political correctness, but it was a much-needed one. We should celebrate a small step in the right direction, but be in no doubt: the assault on freedom of speech will continue.