The Taoiseach says the UK government’s actions ‘does not build trust’.

TAOISEACH MICHEÁL Martin has spoken to UK Prime Minister Boris Johnson today after the Irish government got no “heads up” on the controversial new British legislation that will override elements of the Brexit deal and breach international law.

Downing Street had insisted changes in the Internal Market Bill were simply “limited clarifications” to protect the Northern Ireland peace process if they failed to secure a free trade deal with the EU.

But yesterday, Northern Ireland Secretary Brandon Lewis provoked a furious reaction when he confirmed to MPs yesterday that the legislation would breach international law in a “very specific and limited way”.

Speaking to reporters in Government Buildings today, the Taoiseach said “meaningful negotiations can only proceed on the basis on mutual trust”.

“Unilateral actions which seek to change the operation of measures already agreed included in an International treaty and incorporated in domestic law do not build trust,” said Martin.

“Trust is fundamental in the conduct of any negotiations,” said the Taoiseach, conveying that he is “extremely concerned about the unilateral nature of the UK government’s actions”.

He said the actions by the UK government “undermines” progress in the negotiations, stating:

“It does not build trust.”

Martin said he would “register our very strong concerns” to the UK prime minister, and the move to ”deviate what is an agreed international treaty”. He said people in Europe and the UK were taken aback by yesterday’s comments.

“It is not an acceptable way to conduct negotiations,” said Martin, who added that he is particularly concerned the latest developments “drags Northern Ireland back into the central stage” and could “potentially be divisive”. 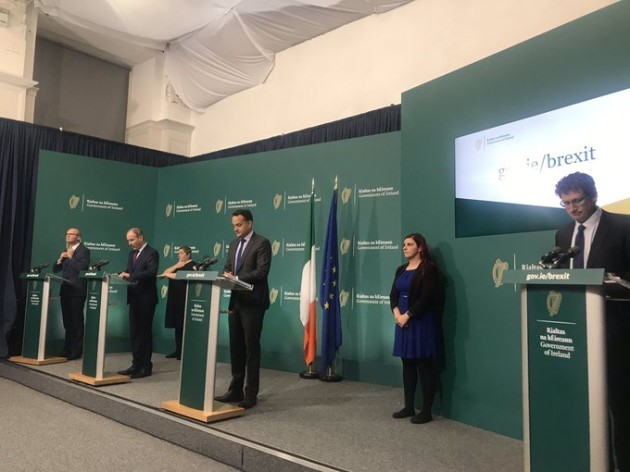 When asked by TheJournal.ie about his first reaction to Lewis’ comments in the House of Commons yesterday, the Taoiseach initially he thought it “was a new departure”.

“I haven’t quite witnessed a member of any government gong into any parliament and saying we are going to break int law,” he said.

He said it does raise questions about whether the UK government will adhere to any agreement if one is reached, adding that Lewis “didn’t display any subtly in terms of his intention”.

Foreign Affairs Minister Simon Coveney said it was important to keep eyes on the prize and to stay calm, but was clearly annoyed at the recent developments.

“I would caution anyone who is thinking about playing politics with Northern Ireland on Brexit again, Northern Ireland is too fragile and too important to be used as a pawn in the broader Brexit negotiations,” said Coveney.

“Now is not the time to reignite disagreements that have been settled,” he said.

Coveney said what has been different to any other week in negotiations, is this week the Irish government and the EU taskforce got no heads up.

Generally if the UK government is making a decision or change in direction “we would get a heads up”, he said, stating the he, the Taoiseach or Tánaiste would get a call saying ‘we are going to do something this week that may create issues’.

“None of that happened this week,” he said, stating:

“It is an extraordinary way of trying to close out negotiations, where trust is the most import component,” he said.

He said the UK government’s approach is “very, very problematic”.

Taoiseach says he will be making it clear to the UK PM the importance of adhering to international agreements.
Share. Twitter Facebook Google+ Pinterest LinkedIn Tumblr Email
Previous ArticleLaser Jolts Microscopic Electronic Robots Into Walking – Could Produce 1 Million Robots per Silicon Wafer
Next Article ‘I have been overwhelmed’: Chelsea boss Lampard HEAPS praise on $100mn Kai Havertz but warns Blues fans to give him time (VIDEO)