Leona Maguire recalls the time when she started to discover problems with gender in golf.

IT WASN’T UNTIL she started going to bigger venues and competing at tournaments that Leona Maguire discovered the deeply rooted inequality that exists in golf. 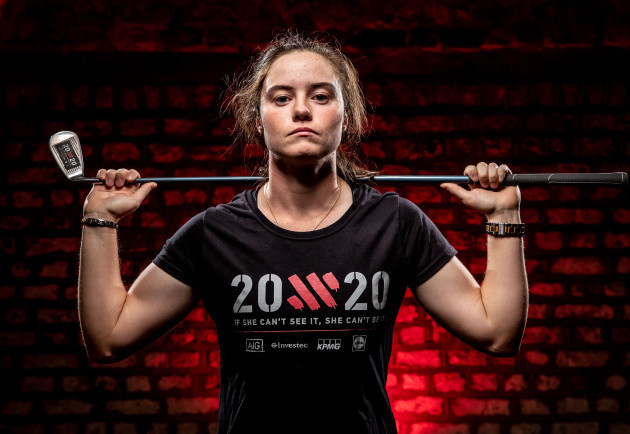 Leona Maguire has had an unusual debut season with a full LPGA card.

As a youngster growing up in Cavan, all she knew was playing golf with the boys and her Dad. Local spots like the Slieve Russell hotel were her playground. The places where her love for the sport first blossomed.

But then the problems started to become apparent. Certain clubs didn’t permit women to play at their facility. It’s an unfortunate history that comes up in the 20×20 mini-documentary ‘The Long Road’ which was published as part of their new campaign yesterday.

Even now, as a professional golfer in her debut season with an LPGA tour card, Maguire still comes across gender related issues at clubs. She’s seen some of the most prestigious golfing societies in the world, who only allow women to play there on Sundays.

The sport has, as Maguire puts it, “made a lot of strides” in correcting the imbalance. But one memory from her formative days as a player stands out for her. Her father was with her, but there was nothing he could do to prevent what was about to happen.

There was one club,” she recalls, “where we played a tournament and went to go into the clubhouse to get something to eat afterwards and the guy shook his head and said ‘they can’t come up here.’

“And Dad said, ‘what do you mean they can’t come up? Go down and look at the scoreboard.’ And they just said, ‘sorry, that’s just the way it is.’ I remember Dad walking out shaking his head and we got into the car and left and those things still do exist.

“It seems irrational that they’re happening but, yeah, I haven’t been back at that club since.”

The excuse she received didn’t carry much water but it’s just a memory now. It didn’t discourage her from going on to play college golf in America, becoming professional in 2018 and eventually securing that full LPGA Tour card for the 2020 season.

Her maiden year on the circuit didn’t quite unfold as planned. The Covid-19 pandemic caused huge disruptions for her schedule, as she returned home to Cavan for an extended break, her longest visit home in six years.

After it was deemed safe to restart the tour, Maguire rejoined the action at the Scottish Open. She also took in the British Open at Royal Troon later in August, a venue that only voted to admit female members four years ago.

“It kind of hit home at the British Open that Royal Troon was one of those when we used to play back 10 years ago,” says Maguire about historic event for women’s professional golf.

“We had to go down to the little Ladies clubhouse that was 700 or 800 yards down the street if you wanted a cup of tea or soup and a sandwich after your round. This year, we were actually allowed in the clubhouse which was a bit strange.

“I suppose it’s taken 10 years for that to become the norm. So I guess when we were playing there 10 years ago, it would have been unheard of that we’d have a British Open there, so that was quite historic.

“There’s still probably some bias in clubs like that where ladies don’t get the prime tee times on a Saturday, their ladies day is on a Wednesday rather than on the weekend which isn’t ideal for ladies who are working and would ideally want to play on a Saturday or Sunday.

It definitely has come a long way in that regard but again, the job’s not done.”

Maguire is in Palm Springs, California this week, competing in the ANA Inspiration. On the day we speak, she informs this writer that it’s a sweltering 49 degrees outside. The area experienced a record high temperature of 120 degrees Fahrenheit on Sunday.

This major tournament is normally held in April’s cooler conditions, but the pandemic pushed it back to this time of year.

“You’re just trying to keep your core temperature down,” says Maguire, smiling through the discomfort.

“I’ve played in some hot weather but I’d say 41 or 42 is probably the hottest I’ve played in. Dubai was pretty hot last year but this is on another level. It’s hot but it’s the same for everybody.”

Looking further into the remaining months of 2020, Maguire plans to stay in America and play as many tournaments as possible between now and Christmas. Her goal at the start of the year was to qualify for majors, learn as she goes and be competitive at each event.

Despite 2020 morphing into an unorthodox year, there’s still plenty of golf to play.

“It’s going to be hectic now. Those first two events in Scotland and then come over here and I’m pretty much here until the last week before Christmas. There’s still some major events on the schedule in October, and it’s looking likely that two out of the four are gone.

“It’s a little bit of a wait and see but it’s pretty much full steam ahead out here.”

20×20 and KPMG ambassador, Leona Maguire, pictured following the launch of the final chapter of the 20×20 movement, ‘The Future for Women in Sport: Choose What’s Next’.

20×20 is calling on people across the country to choose what comes next for women in sport, encouraging everyone involved in sport to ask questions of ourselves and of society, to shape how the future plays out.