Irish patient groups call for a State apology and similar inquiries here following the publication of a UK report.

WOMEN WERE “DISMISSED, overlooked and ignored for far too long”, a new UK report into harmful side effects from medicines and medical devices has found.

From “harrowing” patient stories, they found that this practice was system-wide and not limited to “a few rogue medical practitioners”.

“It’s a mirror image of the Irish experience,” according to Melanie Power, solicitor and founder of Mesh Survivors Ireland. She blames this on “a cultural issue within the medical profession that needs to be dealt with by the Medical Council here”.

The report recommends that the UK Government immediately issues an apology to survivors and families of those affected. Irish survivors of mesh treatment and sodium valproate are now calling on the Irish State for similar recognition.

The Independent Medicines and Medical Devices Safety Review today published its recommendations for wide-ranging and radical improvement across the UK health system. The report titled ‘First Do No Harm’ is the outcome of a non-statutory inquiry into pelvic mesh treatment, sodium valproate which is a drug used to treat epilepsy (sold as Epilim), and a hormone pregnancy test drug used up to the late 1970s.

Patients in all three of these groups “ have suffered at the hands of clinicians who do not, or who chose not to listen and have been abandoned by a system that fails to recognise and then correct its mistakes at the earliest opportunity”, according to the report.

The system is not safe enough for those taking medications in pregnancy or being treated using new devices and techniques. Patients are being exposed to a risk of harm when they do not need to be.

Vaginal mesh devices have been used in operations to treat stress urinary incontinence (SUI) and pelvic organ prolapse (POP); two conditions that can impact women after natural childbirth or in their later years.

Thousands of women globally, including hundreds in Ireland, have reported painful complications after these surgeries. In some cases, the device, which is made from a type of plastic, has broken up and embedded itself in the tissue and organs around it.

“We have been appalled by the numbers of women who have come forward to say they never knew they had had mesh inserted,” the UK report stated. It also said that “many patients we heard from felt that clinicians have been reluctant to admit to any mistakes made during, or acknowledge any adverse outcomes from, an intervention”.

Children exposed to the drug sodium valproate while in the womb are at a high risk of serious developmental disorders (in up to 30-40% of cases) and congenital malformations (in approximately 10% of cases), according to Epilepsy Ireland. The HSE has estimated that up to 1,250 children may have been impacted in Ireland between 1975 and 2015.

Today’s report found that “babies are still being born today – estimates suggest hundreds a year – exposed to sodium valproate despite the teratogenic risk being well recognised and undisputed”.

A similar finding was reported by Epilepsy Ireland last week when they found that less than 30% of women have heard of the mandatory pregnancy prevention programme that was part of strict measures put in place in 2018 to warn women of the dangers.

The UK report concluded that “it has taken far too long for serious action to be taken to reduce the number of women who take sodium valproate during pregnancy while unaware of the risk”.

The final drug investigated, Primodos which was sold as Duogynon here, may have deformed and killed babies in the womb. It was used from the 1950s to the 1970s before being withdrawn from the market.

The report stated that hormone pregnancy tests should have no longer been used from 1967 as risk-free alternatives were available. It concluded that “failure to act meant that women were exposed unnecessarily to a potential risk”.

Gross underreporting of side effects and complaints was highlighted as well as “the widespread and wholly unacceptable labelling of so many symptoms as ‘normal’ and attributable to ‘women’s problems’”.

“It’s the same issue as cervical check – women being ignored,” said Power. “It shouldn’t fall on chance that you have an extremely strong advocate as to whether or not patient issues are actually dealt with.”

Today’s report said that “patients should not have to fight for a proper diagnosis”. It highlighted the fact that for mesh complications, it was patients and support groups that raised the alarm. This was also true with sodium valproate patient groups.

“It’s abundantly clear from the scandals we’ve had over the past number of years that the patient’s voice isn’t being heard,” added Power.

One of the main recommendations of the report is that the UK Government “immediately issues a fulsome apology on behalf of the healthcare system to the families affected”.

“The first thing that this Government needs to do is a State apology. It’s a long time in the waiting,” according to Karen Keely, chairperson of OACS Ireland. This group advocates for families whose children have been affected the use of anticonvulsant medication, including sodium valproate, during pregnancy.

Those in Ireland remain unheard and in the dark as to why these tragedies were allowed to continue happening for nearly forty years.

Keely’s three sons, now in their 20s and 30s, were born with fetal valproate syndrome (FVS) which is caused by sodium valproate after she was not informed of the risks by her GP or neurologist. Two of her sons require ongoing care and Keely worries about what will happen to them as she gets older.

The guilt that parents felt was referred to a number of times in the report. Keely said until a State apology is issued parents will continue to feel it’s their fault.

Power of Mesh Survivors Ireland said, “An apology is always welcomed but it needs to be an apology that admits fault”.

Other recommendations included schemes to meet the cost of providing additional care, establishment of a Redress Agency for those harmed, establishment of specialist centres and listing of financial interests of doctors by the Medical Council. 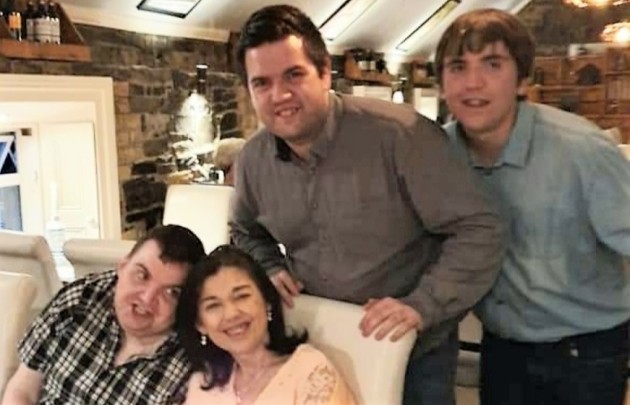 Karen Keely of OACS Ireland with her three sons

In 2018, the Oireachtas Committee on Health recommended the establishment of an independent inquiry to examine the licencing and use of valproate in Ireland. With the publication of the UK inquiry, both Epilepsy Ireland and OACS Ireland are renewing their call for this.

“This is the first step in the UK towards some sort of justice but people in Ireland need answers too,” said Peter Murphy, chief executive of Epilepsy Ireland.

Prior to the 2020 general election, Fianna Fáil and the Green Party both committed to the holding of an inquiry, according to OACS Ireland.

Keely said that the new Government “must now follow through on its commitments and investigate whether those impacted by sodium valproate were failed by the state”. She also called on the new Health Minister, Stephen Donnelly, to commission a redress scheme for affected families.

Mesh Survivors Ireland are also calling for an inquiry into the use of vaginal mesh treatment. Power said the UK review is useful but “it’s not the Irish women’s voice”. The group wants to know:

Why has it happened? Why has this gone on to be ignored? Why have we still not have the patient’s voice being heard? Why do we have to rely on the UK to clean up all our messes?

It is clear that there is gross under-reporting, and our complaints systems are both too complex and too diffuse to allow early signal detection.

In a statement to Noteworthy about these findings in the UK, the Irish regulator, the Health Products Regulatory Authority (HPRA) said it “intends to fully review the findings once published”.

In the meantime, it said it is not in a position to comment on the report. “However, it will welcome any new insights that can provide further understanding and lead to improved outcomes for patient care.”  It continued:

It is our understanding that the UK review examined the totality of the response by a healthcare system. The HPRA would, therefore, welcome a coordinated approach involving all parties in the health system who have a responsibility to improve patient outcomes from the clinical use of health products, to ensure a comprehensive assessment of this report and associated recommendations.

Murphy from Epilepsy Ireland called for a similar coordinated approach in the form of a stakeholder forum where everybody, including affected patients and families, sits at the table to examine the UK report as “we know we have the same problems in Ireland”. Immediate actions could be implemented as an outcome of this report, he added.

In a statement to Noteworthy yesterday when asked about a Government apology, redress scheme and Irish inquiry, the Department of Health said it “is aware” that the review is being published today. It added: “However, as the report has not yet been published, we are not in a position to comment further”.

Do you want to know why Irish women were not told for decades about an epilepsy drug that causes birth defects?

The Noteworthy team want to do an in-depth investigation into why action wasn’t taken sooner to prevent babies being born with congenital malformations and neurodevelopmental delays and find out what is being done by the Government for mothers and children affected by sodium valproate.